Details surrounding both the upcoming cross-play and progression features have been unveiled by Ubisoft, shedding light on the much requested feature.

Following the initial announcement surrounding cross-play and cross-progression during the Ubisoft Forward panel at E3, Ubisoft dived deeper into the specifics this week during a Q&A Blog Post  here.

Here are all the announced details about the two upcoming features in one place:

Cross-Play is the ability to play with players from other platforms.

Starting from June 30 this year, the Cloud Gaming platforms of Amazon Luna and Google Stadia will be able to play with PC players, vastly increasing the player bases and decreasing wait times for the Cloud player base.

Players won't, however, be able to invite friends to form a cross-platform PC/Cloud squad at launch, with Ubisoft looking into solutions to allow this.

Following this, in early 2022, PlayStation and Xbox players will be able to play together in a move that will have massive ramifications for the dwindling console esports scene.

Now, with all interested players in one place, running tournaments becomes much easier and signups should effectively double. 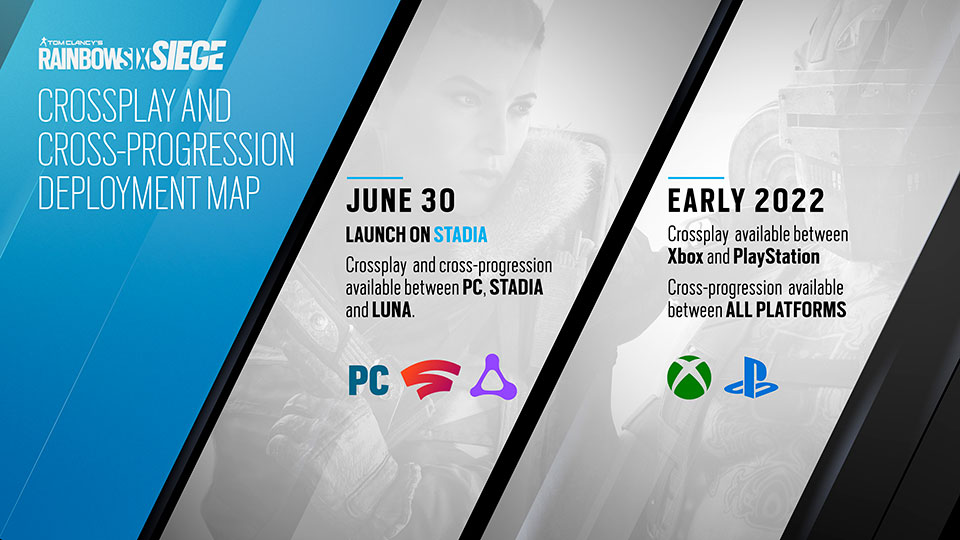 Crucially, the PC/Cloud scene and the PS/Xbox scenes will remain separate, with no plans to launch cross-play between these two, which will likely come as a relief to many console players.

Finally, cross-play can be disabled in the settings, which will lead you to only matching or only being able to form a squad with players on your own platform.

Cross-progression, meanwhile, is the ability to continue over one save or inventory from one platform to another and vice-versa.

In a similar schedule to cross-play, this will be launched across just PC, Google Stadia, and Amazon Luna on June 30 this year, followed by the addition of PlayStation and Xbox in early 2022. Unlike cross-play, there won't be a PC/console split scene, with cross-progression taking your items across all five platforms.

As outlined, this will involve merging all accounts with the same Ubisoft Connect account into one.

There will be no need to pick a "main" account or make a new one. All items that a player has bought on consoles will be available to use on PC and vice-versa, but if an item was bought on multiple platforms, there will not be a refund.

This also carries over any in-game bans or sanctions, so if a player is banned on PC for cheating the console account will also be banned.

The in-game stats will be merged into one, however the rank/MMR will remain distinct, showing a "Mouse & Keyboard" and "Console" rank separately.

Finally, unlike cross-play, cross-progression cannot be turned off and will be automatically available for all players by this time next year.

Stay tuned for further details on this and future dev blogs here at SiegeGG.