Prior to SI21, the online Stage 1 tournaments came to an end with three grand-finals in LATAM, including the Copa do Brasil tournament.

In early May, while the rest of the world simply waited for the Six Invitational to come, Latin America saw three super-cups take place in each sub-region, as the top Tier 2 rosters faced the bottom LATAM League lineups.

As well as this, Stage 2 of the Women's Circuit took place, offering action at every level of play.

Now, with the champions all crowned, let's take one last look back at the tournaments ahead of the Stage 2 kick-off in two weeks.

The BR6 teams of W7M, Santos, Black Dragons, and INTZ were joined in this tournament by the top Tier 2 rosters, creating a strong mix of skill levels.

Those included the academy rosters of Team oNe and Black Dragons, the ex-Santos roster of VINCIT Gaming, and a number of impressive up-and-coming rosters, including ALTACUPULA, SuperNova Team, and PS4 Machines.

You can get a deeper rundown on the tournament here. 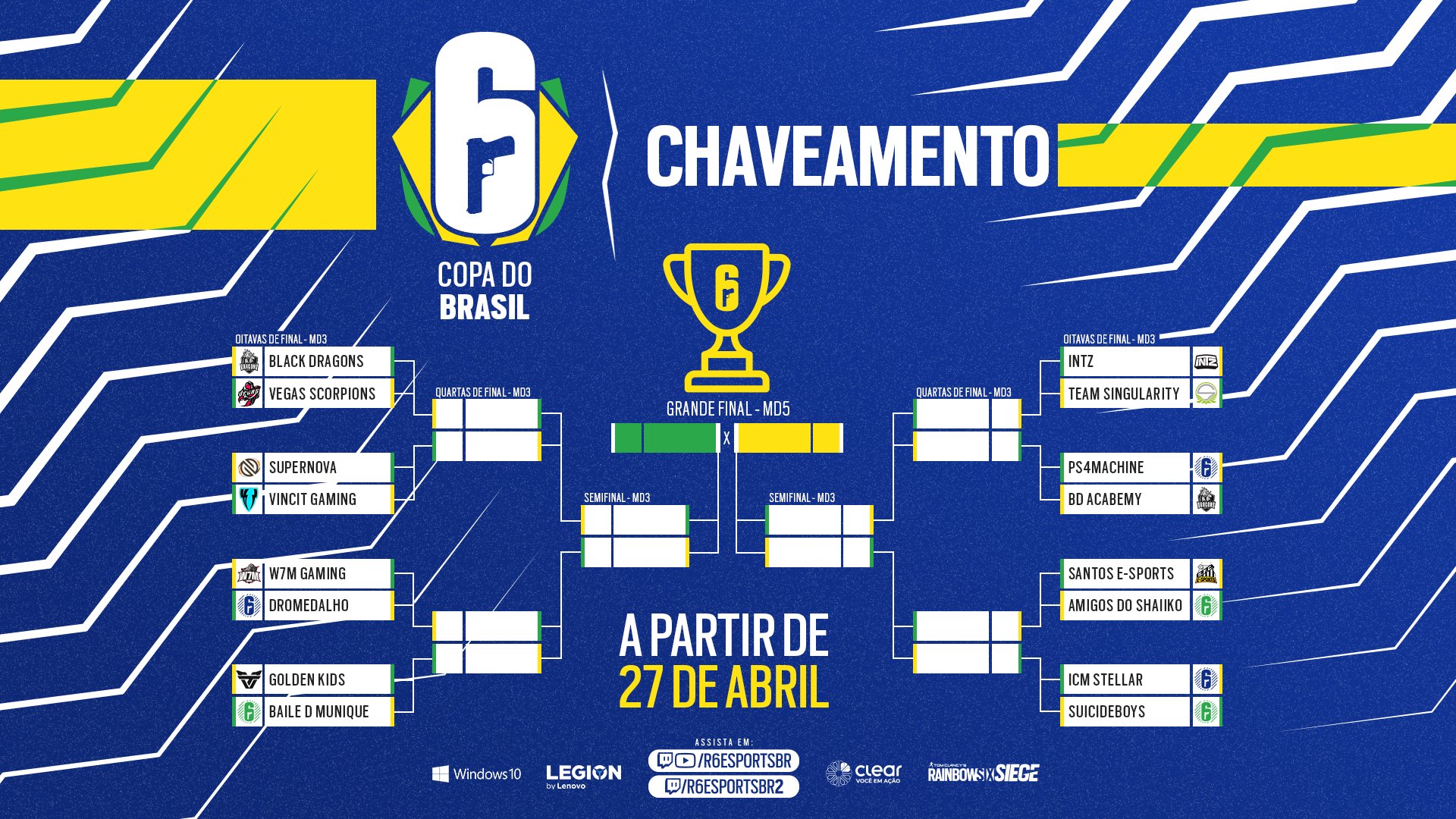 The BR6 pro rosters were clearly the favorites in this tournament, but they struggled throughout. Day 1 saw W7M fall against the relatively unknown Dromedalho roster in a 7-4, 7-2 scoreline, as two W7M players -- pdr1n and Guii -- had a K/D of 0.5 or below.

Day 2 then had INTZ fall against the new Singularity roster, which included the ex-BD player of GdNN1 (who has since been signed by W7M), as they demolished their opposition.

Across Villa and Clubhouse, INTZ won just four rounds total, as SNG's ZaaK went 21-8 on Ash/Jager, including 5-1 on entry and a 1v1 victory. Both teams also secured a 1v3, with GdNN1's being in a post-plant situation.

Black Dragons were next up on Day 3, as they faced SuperNova Team with resetz subbed-in for yoona. SuperNova had just defeated the ex-Santos roster of VINCIT the round prior and did struggle, with their win coming down to 8-6 on Map 3.

The standout player in this game was Peress, who went 14-6 on Map 1, followed by 14-9 on Map 3. This was Hugzord's last game for Black Dragons, as he has since been benched from the roster following fan backlash over him playing.

The last remaining BR6 team went out on Day 4, as Santos lost to ICM Stellar. Santos' lone map win came with an 8-6 scoreline, while ICM took the maps of Clubhouse and Oregon 7-4, 7-1 to set up an all Tier 2 semi-final. 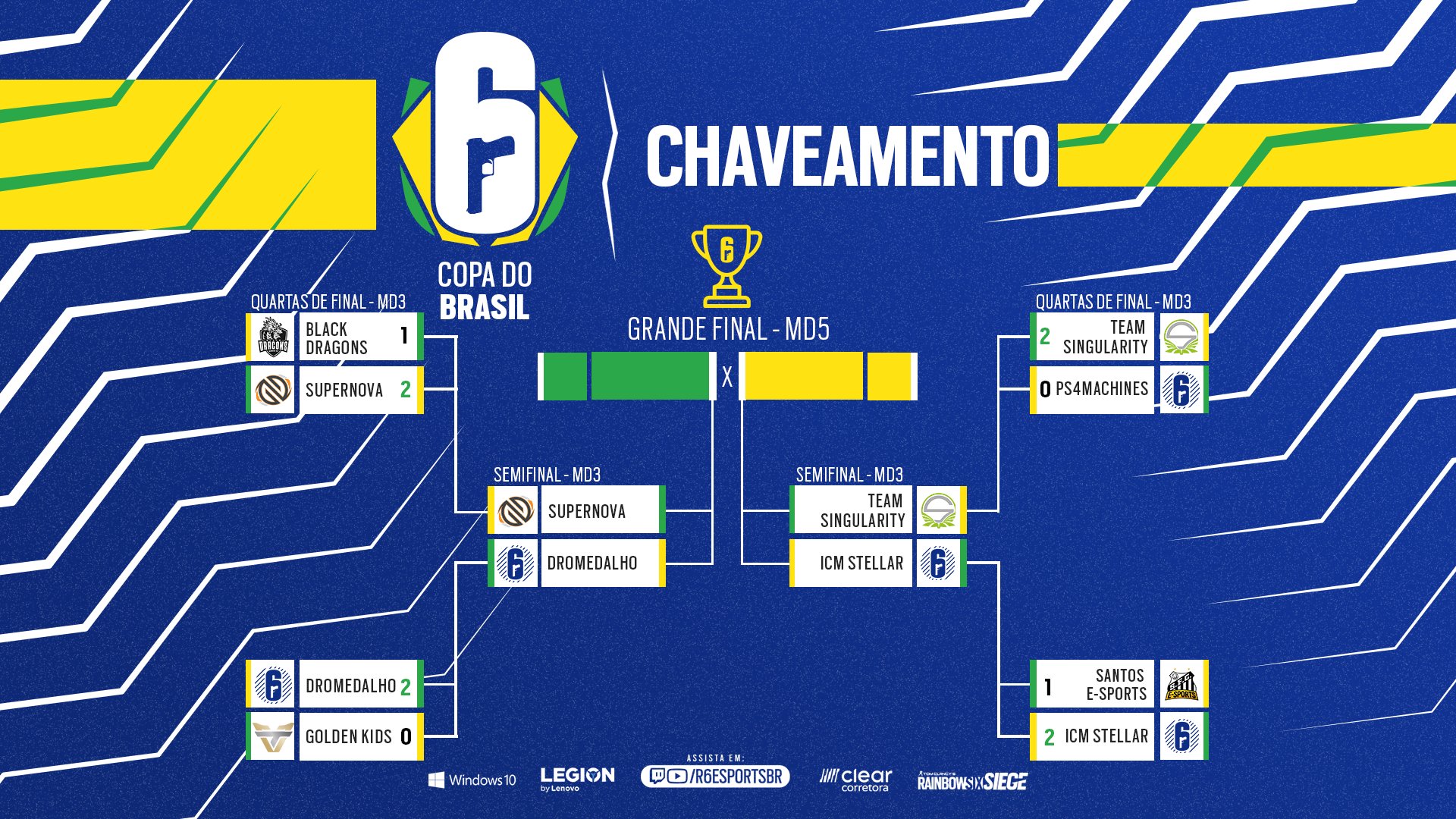 This was clearly a massive win for the challenging lineups, showing how deep the Brazilian scene is, with the top-three Brazilian lockout at the Six Invitational possibly cementing the region as the strongest in the world right now.

Following this, the semi-finals took place, starting with SuperNova vs Dromedalho. Both teams had two very impressive wins over Tier 1 and 2 teams in the games prior, but SuperNova seemed far better on Coastline, despite it being Dromedalho's map pick.

After falling behind, the team kept on squandering key chances, such as the 5v3 post-plant situation below, only managing to win a single other round on this map. This led to a 7-5, 7-2 scoreline and put SuperNova in the final.

Finally, after all these upsets, SuperNova made clear who's boss with a 3-0 victory over Singularity in the best-of-five map grand-final.

While Map 1 ended in a dominant 7-2 (which included a 1v3 win from Dusti for Singularity), the following two maps of Chalet and Coastline went right down to the wire and ended in two 8-7 scorelines.

In particular, the Chalet victory ended up being decided in a large part by peres and ZaaK, who achieved triple kills each in overtime, while five kills in three overtime rounds along with a 1v2 victory earlier on Coastline meant ppWs was the MVP of Map 3. 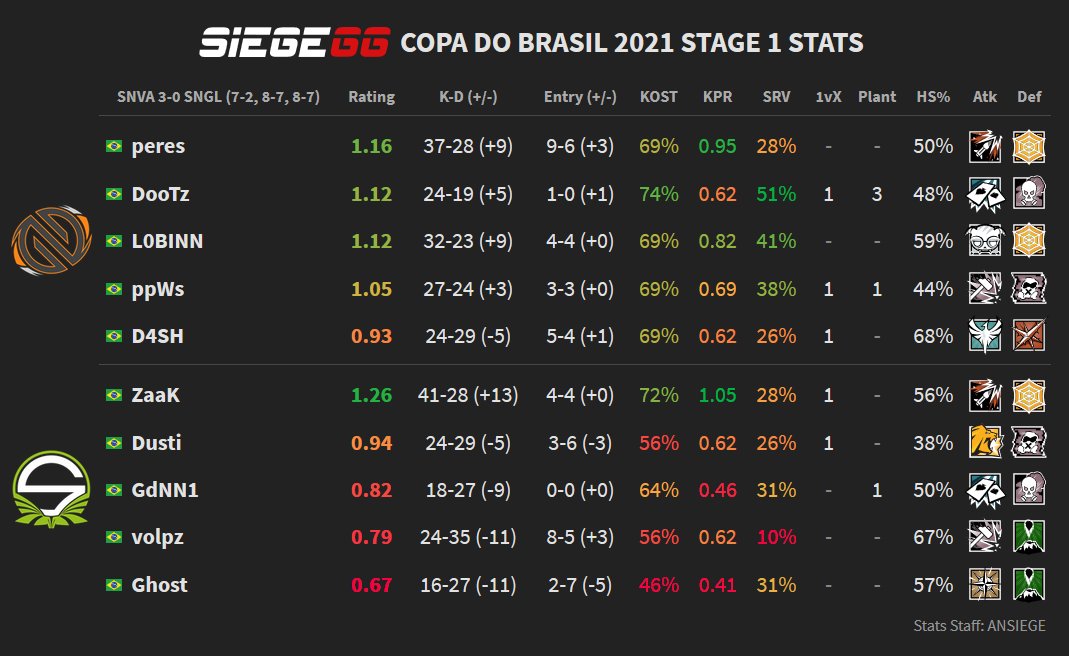 The Mexican Super-Cup started in a very similar way as the Brazil Cup, with teams such as Fenix Esports Academy, GGE Esports, and Alpha Team all upsetting the established Mexican Championship teams, with MeT's loss to Fenix Academy (7-5, 8-7) leading three players to leave the team.

As the grand-final between Fenix Academy and Alpha Team was set up, but an initial investigation and then announcement of a disqualification completely changed the tournament as Alpha Team's player of Xent was caught using macros.

This led to him being banned from competing for a year and the team being disqualified.

This put Ubisoft in a conundrum on how to proceed, as Alpha Team had already knocked out three teams, including OverKnight and Six Karma, eventually deciding to simply replay all of Alpha Team's matches.

In the replay, Team Cruelty received an automatic forfeit win over Alpha only to lose 2-0 against OverKnight to set up a Six Karma vs OverKnight semi-final; two teams that had finished the MX Championship tied on points in fourth and fifth place.

Despite this, OKT was clearly better on the day, winning 2-0 to meet Fenix Academy in the grand-final.

However, after going down 0-2 and winning on overtime to tie it up to 2-2, OverKnight choked on the last hurdle, as 2.0 K/D ratios from both GladiuZ and Unfixed meant Fenix tied their offensive half on Villa to win the map 7-5 and take the Mexican Super-Cup title.

Unlike the other two sub-regions, the South American Championship teams actually fared well, filling out the Southern Super Cup semi-finals completely and only losing games to each other.

In total, only three maps were won by Tier 2 rosters against the six SUC teams, with Infamous, Furious, and Nocturns losing one each early on, but largely pushing through their opponents with no problem. 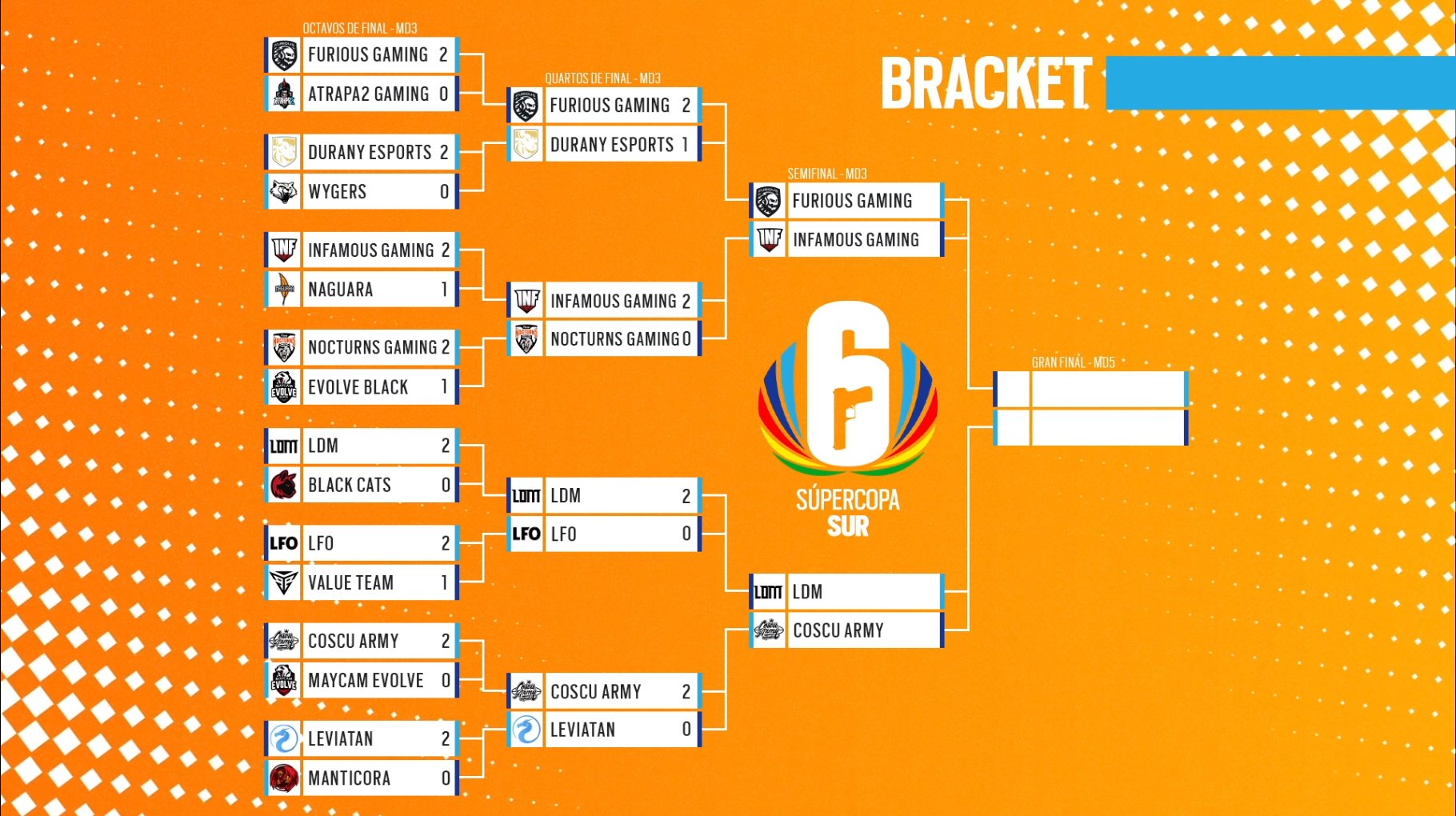 The first semi-final took place yesterday between Furious and Infamous and, Furious took the game in a straight 2-0 as expected, considering Furious ended the South American Championship with twice the points of Infamous.

The game did come fairly close on the map of Kafe, with a zero-second clutch from Dego pushing the game all the way to Round 15. Here, after two very ill-advised jump-outs from Infamous, the team managed to claw back a 2v4 to a 1v1, only to lose the game due to a missed shotgun shot.

The second semi-final was a much closer game, with two overtimes on Maps 2 and 3 deciding the matchup in LDM's favor over Coscu Army.

Here, the game's MVP was without a doubt SUPREMAA, whoes triple kills on the final rounds of both the last two maps -- including a 1v2 win on Map 2 -- gave them both wins they needed.

And so, in the grand final, we had LDM vs Furious, making this the only sub-region where the top-two seeded teams entering the tournament actually lived up to their hype.

Just like in Mexico, this game went on for a grueling five-map marathon which included two overtimes and a total of 63 rounds. By the end, it was LDM who came out on top despite a 7-8 loss on Oregon and managed to take Chalet 7-3 to take the title.

We took the championship with a 3-2 victory against @FuriousGamingLA
A barbecue to celebrate and continue training.

Lastly, Stage 2 of the Women's Circuit tournament came to a close as the six top teams faced off in an initial group stage followed by a single-elimination playoff.

While Black Dragons have won almost every single women's tournament in LATAM history, they were beaten to the 2020 title by FURY in the first real bit of competition they've had to date, which put their strength this stage in question.

To add to this, new on the scene for 2021 are Cinderellas Esports, who include two of the best-known ex-BD players of russa and Thaii.

Finally, INTZ also came in hoping to capitalize on Miranda's BR6 experience and the skills of their newest pickup of Ch3rn4, another ex-BD player. Also of note for INTZ is LuliArlequina, who is both the only non-Brazilian in the tournament and also a well-known caster who covered the 2020 LATAM tournaments in Spanish for the rainbow6latam channel. 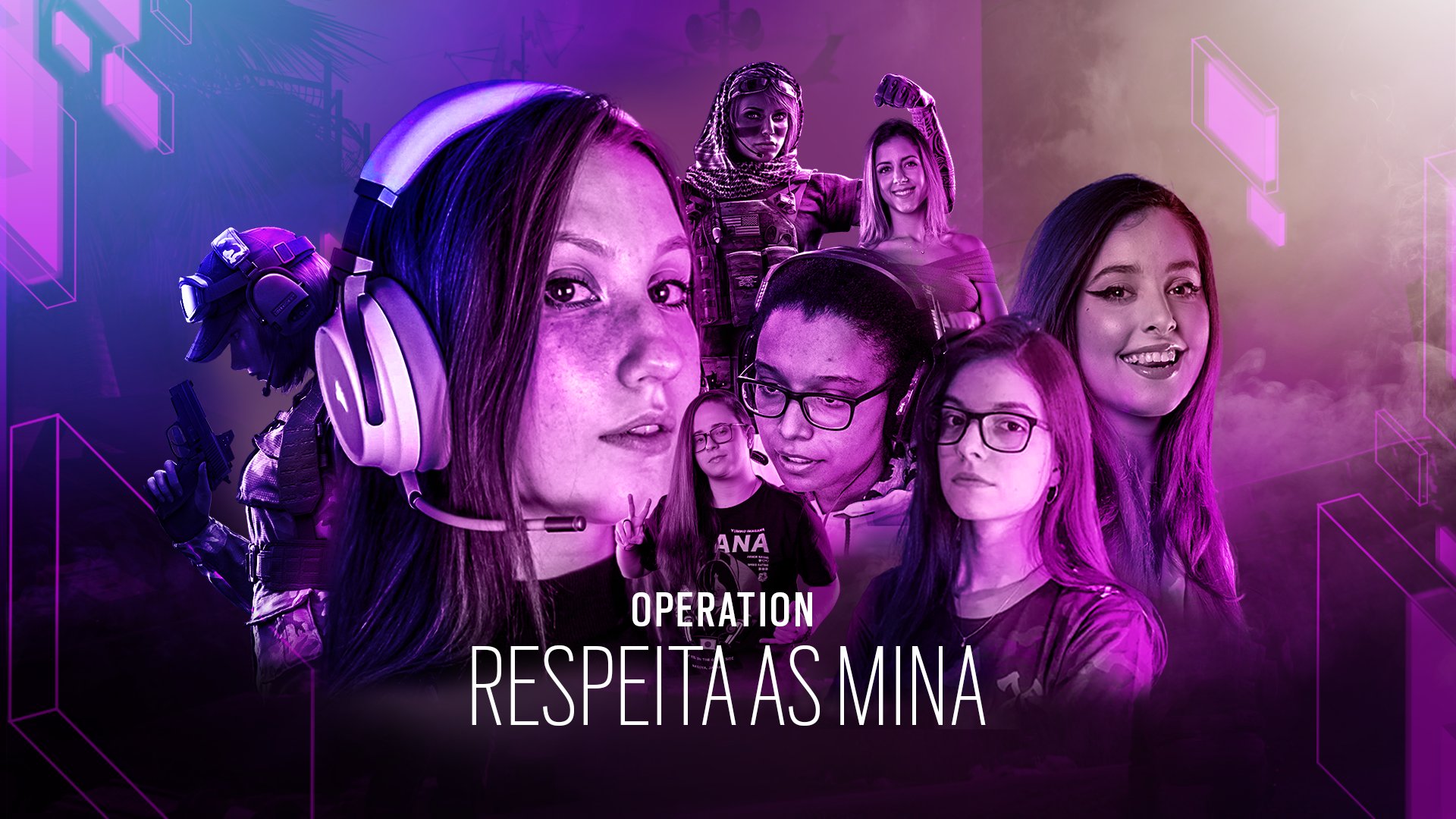 The tournament itself started out with a lot of promise; while INTZ somewhat disappointed, both FURY and Cinderellas both impressed, as they beat Black Dragons 7-5 and 7-3 in the Bo1 round-robin group stage to go ahead.

Most of the note across these games were Pessima8 for FURY, who was crowned the Day 1 MVP by going 17-4 against INTZ, Pinkprincess, whose 11-4 against RDW got her the Day 2 MVP award, and russa, who closed out the groups by going 23-6 in Cinderellas' 7-3 victory over Black Dragons. 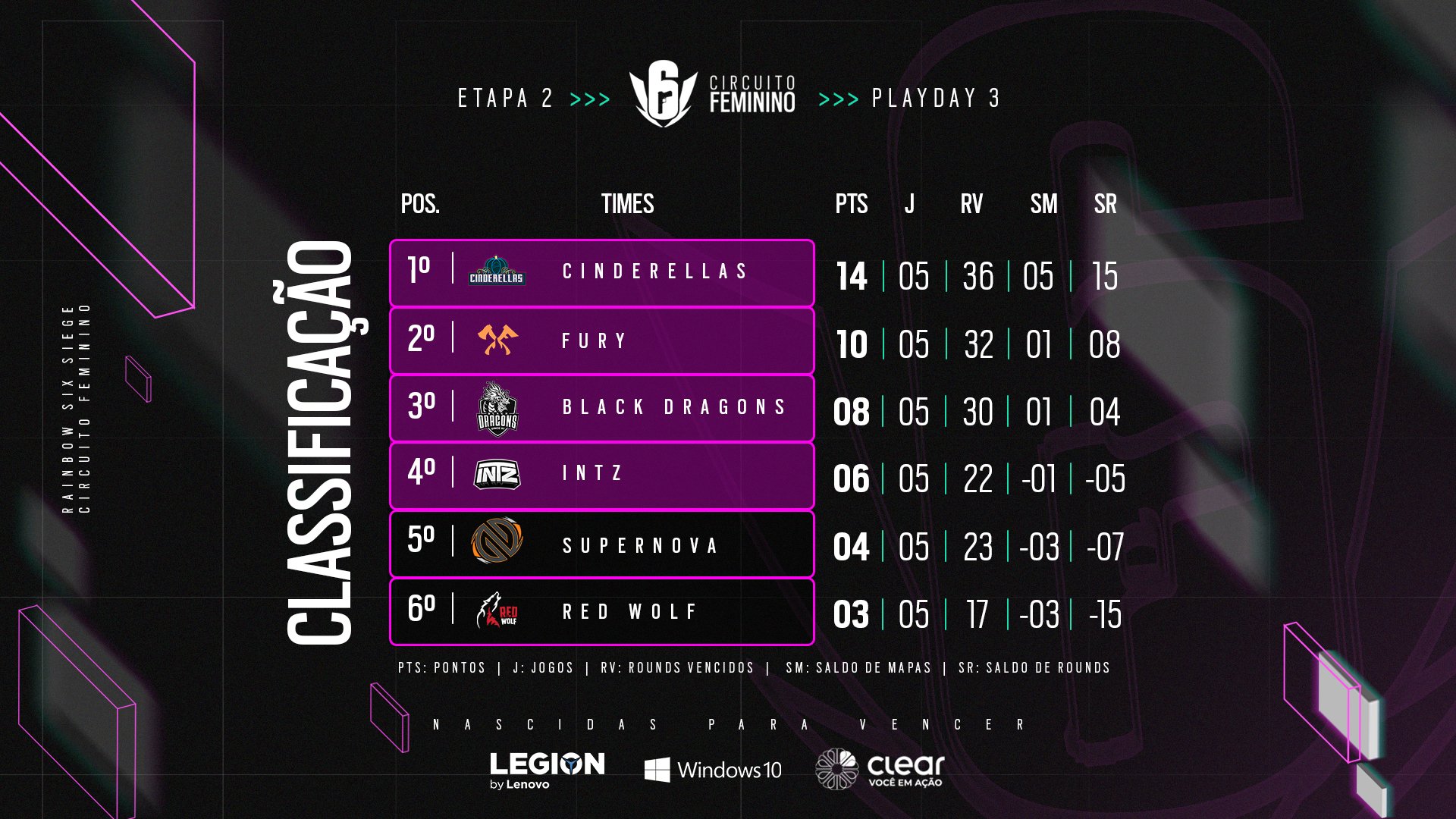 This then set up the semi-finals of Cinderellas vs INTZ and FURY vs Black Dragons on May 2nd. Both these games ended 2-0, with the only close map coming on Villa in the INTZ game. Here, after two 4-2 splits, overtime was decided as Chl0e secured four kills and harley three to close out the map, 8-6.

In the end, this led to a BD vs Cinderellas grand-final, a match-up many fans were expecting. Here, after a 7-4, 4-7 scoreline on Coastline and Oregon, Chalet was the decider map in the second three-map game of the 2021 season.

The first instance had also been between these two teams during the Stage 1 semi-finals, which BD took 2-1.

After going behind 1-5, Black Dragons mounted a flawless comeback on their own defenses to take the map 7-5, as double-kills from Lara and Bits in a post-plant retake took the final round. This meant that BD took the Stage 2 title, the organisation's ninth tournament win to date in the Women's R6 scene.

With BD having won both stages, they stand clearly as the top women's team in the region despite the strong resistance.

While these six teams are set to meet once again next week, Cinderellas has since dropped its roster.

As such, despite being the second best team in the scene, they have been kicked out of the $60,000 tournament due to no fault of their own.

Nevertheless, the five remaining teams will play in Stage 3 next week, with the top four teams across all five stages meeting for the $18,000 playoffs in October -- taking place the same day as Stage 3's Elite Six Cup competition -- to crown the 2021 champions.

The LATAM Leagues will return on June 19th, the National Cups on July 21st, and the Women's Circuit on June 10th. Be sure to keep an eye out at SiegeGG for a rundown of each of these tournaments as they come.