Spain Nationals Season 3 Split 2: Everything You Need To Know

The Spanish Nationals are finally back as the first to return after the conclusion of SI 2021.

After two exciting weeks in Paris, it is time to focus on those that are working on becoming future Six Invitational contenders. In Europe, everything begins in the national ecosystems, who now continue their seasons, starting with the Spanish Nationals.

Despite the first leg having games at a maximum of 12 rounds, the second leg will be different as it will follow a more updated format. Now, the games will last up to 15 rounds, with overtime wins awarding two points and overtime losses just one.

In terms of positions and the table, the six best teams will still make it to the next phase and the league will still award a spot in the next European Challenger League.

The Spain Nationals S3 started with a huge question mark next to its name. Would the quality of a wave of new players compensate for the departure of both the. Indeed, it may feel like the quality of the league has taken a step down. However, with many teams taking their first steps in the national competition, the league has never been as evenly-matched. 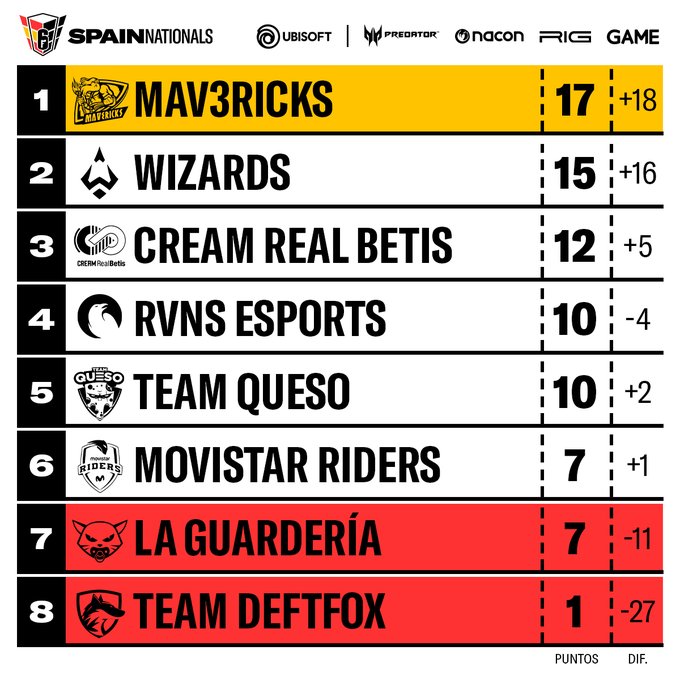 The first leg saw Mav3ricks and Team Wizards as the strongest sides in the league, with Movistar Riders constantly flirting with the relegation zone.

Let’s have a look at the rosters, as many of them have undergone changes:

After a good performance under the Electrify Esports colours before the organisation decided to move to APAC, the Spanish roster had no problems finding a new home.

The team lead by José “Jot4” Javier is still undefeated after the conclusion of the first leg. However, four out of their seven games saw 12 rounds played, with two wins and two draws. This is something that will change soon, thanks to the aforementioned format change.

The biggest surprise in the league this season is likely Alejandro “Alex.exe” Lora’s performance, as the Spanish player has 111 kills to his name after only seven games.

This is by far the Wizards’ best performance at any Spanish Rainbow Six competition, as the organisation has always been seen fighting in the relegation zone. However, after the acquisition of the orgless roster of TSO, the situation is completely different.

The roster’s only two losses came against two of their direct opponents, Mav3ricks and Cream Real Betis, both finishing at 7-5. The roster boasts the highly skilled Portuguese-speaking duo of Pedro “THUUNDER” Henrique and Mario “Nubaii” Oliveira, who have elevated it to second.

Despite their good performances, Wizards decided to make a change after the ending of the first leg as Jorge “iZorTeN” de Diego was replaced by the now ex-member of RVNS Esports, David “Deivid” Vila. This signing makes the current Wizards look very similar to TSO in Season 2, as four out of five members continue from that roster.

The green and white team would be closer to the Top 2 places if not for a very unexpected draw against the bottom team of Team DeftFox.

This introduces us to the next statistic, as Cream have drawn three of their seven games, which makes them the side with the most draws to their name. Nevertheless, two of these came with them winning the 12th round, which bodes well for this team’s mentality.

Despite dropping points against DeftFox, Cream did win against the second placed team of Wizards, which could be a pivotal result at the end of the season.

Nevertheless, it was one of the first teams to announce a roster change after the first leg, as Rubén “Benru” Fernández was replaced by Erick “Ace” Ayora.

In fourth place we have the crows of RVNS. After a poor display in the first round, as they kicked off with a 7-1 loss against Wizards, RVNS’ positive results against high caliber teams such as Mav3ricks (6-6) and Cream (7-4) left them in a good place after the first seven matches.

Nevertheless, RVNS’ future is unclear to say the least. The team has lost their two best players in terms of KOST, as the already mentioned Ace (0.65) and Deivid (0.63) have signed for Wizards and Cream, respectively. Moreover, these two players were pivotal in terms of fire-power, especially Deivid, as he is currently the fourth best player in terms of kills and kills per round.

The ex-La Guardería player of Juan “Bombii” Benru and the ex-member of Cream Real Betis, Rubén “Benru” Fernández, have meanwhile joined the team and will try to keep the organization inside the top six.

A squad full of young talent, Team Queso will probably make a step forward during the second leg. It has been able to keep up with its direct opponents thanks to wins against the three bottom teams of Team DeftFox, La Guardería, and Movistar Riders.

It is also worth noting that the team finished in second place of the Mid Season Cup, a tournament held before the Six Invitational which had eight teams from the Spain Nationals.

However, the truth is that the team has delivered poor performances when playing against their closest competitors. In fact, Queso have only scored one point against teams from the Top 4, as they drew against Cream but lost against Mav3rics, Wizards, and RVNS.

As a consequence, Team Queso decided to make changes. And what a change. Known as one of the most promising talents in the Spanish scene, Abraham “Blacky” Bautista signed to replace Pau “UNKNWN1” Paús. Overall, this roster is packed with a lot of individual talent and could be the upset of the season if its players correctly play their cards.

No one expected them to be here, but here they are. Movistar Riders problems’ were a mix of situations in and behind the scenes and have suffered from many changes since Day 1. Juan “JU4MP4” Pablo’s stage with Movistar ended after their 7-4 loss against Team Wizards and Andrade “Couto” Couto had to come to the rescue.

Once the first-leg came to an end, the team announced the incorporation of Oscar “Kuriboh” Puerma.

With the signing of Kuriboh, the x6tence trio including José “WeskeRR” Luís and Andrés “Billordo” Gabriel have been reunited. With the presence of one of the best players in the scene now, Couto, the best young talent in the nation with Jordi “Foskito” Bodro, and analyst Óscar “Wazo” Llano, the team has all the ingredients to step it up.

The only orgless team left in the competition, La Guarderia counts with one of the best players in the nation, Alberto “Batfat” Montenegro.

Despite losing Bombii, their highest rated player in terms of KOST, the team hopes to be able to follow their opponents’ pace in order to finish outside the bottom two, which would relegate the roster.

In last place is Team DeftFox, a team that has a lot to improve in order to even give a fight to their direct opponents in the relegation fight, before even turning their sights to the top table.

This roster has conceded the only 7-0 loss, one of the only two 7-1 losses, and two of the only four 7-2 results in the league this season. Although they lost 7-5 to RVNS and managed to draw against Cream, the truth is that they are the favorites to finish in the bottom of the table by the end of the season.

You can watch the games every Tuesday and Wednesday from 7 PM CEST (UTC+2) onwards on Twitch and on YouTube. This week, we will see the Top 4 battling against each other as Mav3ricks faces Cream, while Wizards are against RVNS. Meanwhile, Riders will face DeftFox, while Team Queso will face La Guardería.