As the 2020 season came to an end for the APAC region, here's a brief roundup of the action across the Oceanic, North, and South Asian regions.

With the long overdue APAC Finals finally marking an end to the 2020 season over the past weekend, the APAC region certainly saw things out with a bang.

The three subregions of APAC North, Oceania, and South Asia (with the latter two making up APAC South) brought together their top two teams from Stage 1 and Stage 2 of the regular season in a fight to crown three subregional champions.

For both APAC North finalists, and Oceania's Wildcard Gaming, though, these Finals were likely at a less-than-ideal timing. While each team certainly wanted the bragging rights and the prize money that came with a win, all three are headed to the Six Invitational 2021 next month and would have been reluctant to show off their most up-to-date strategies.

Read on to find out how Cloud9, Pittsburgh Knights, and ex-Mercenariez found themselves champions of their subregions over the past weekend.

With the Koreans of Cloud9 going up against the Singaporeans of Giants Gaming, not much was certain except that the series would see some spectacular fireworks. Both teams were qualified for the Six Invitational, each had won a Major in 2020, and every past game had been brutally close.

Eager to exact revenge for their 6-8, 7-8, 7-8 loss in the November Major, Cloud9 started off brightly on their opponents' map pick of Coastline. Traditionally a stronghold map for the Giants, a defensive start for them proved brutal as a Song "SyAIL" Dongseon led Cloud9 attack tore the Singaporeans to shreds in a 5-1 first half.

However, Giants' Matin "SpeakEasy" Yunos was not to be silenced, reeling off kill after kill and dragging his team through sheer force of will to a 5-1 attacking half of its own, thus forcing overtime. In the end, though, his efforts were for nought as Cloud9 secured a defense and attack round each to take the map 8-6.

Moving onto Oregon, then, the Giants started off better, taking the first three of four rounds on defense. However, Cloud9 began clawing things back and equalised things at the halfway mark. And then, it was all over. On defense, Cloud9 was virtually impenentrable save for the first match point round, and try as they did, the Giants looked very small as they fell to a 4-7 defeat.

The win marked a 2-1 lead for Cloud9 in Grand Finals for the 2020 season, and a 3-1 Grand Finals lead overall since the introduction of formal competition to the APAC region. As such, Cloud9 took deserved plaudits as champions of APAC North in 2020, but their real test is to come next month at the Six Invitational. 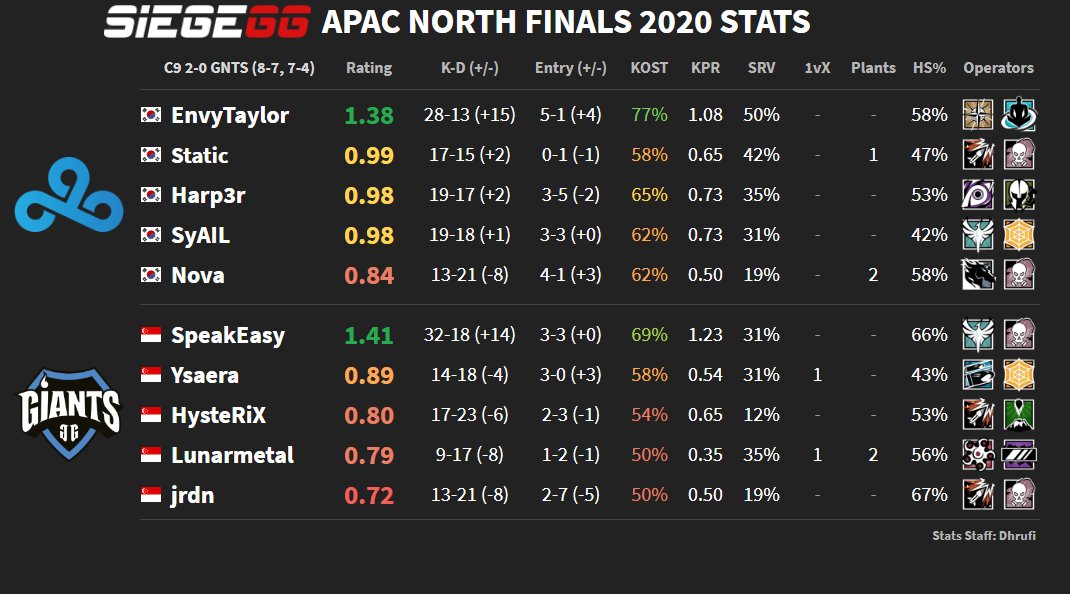 Oceania, like South Asia, had played its final on the Saturday, between a Pittsburgh Knights squad whose invitation was questioned by some fans, and a Wildcard Gaming roster on its way to the Invitational.

Things started off as many had expected, with Wildcard Gaming asserting the dominance expected of a team that had attended the past two international LAN events. The attacking half went 3-3 in an encouraging sign for them on Villa, and while they lost their first defense, four rounds in a row in the second half got them the map.

Theme Park then started off similarly, with Wildcard sweeping to a 4-2 lead on defense -- almost a pre-requisite for a map win there. However, Mitchell "Sageon" Sage turned on the style and was everpresent in the defensive rounds, pushing things to overtime with multikills galore. Once there, a defensive start was all the encouragement the Knights needed as they converted the defensive round win into an offensive one as well, pushing proceedings to a third map.

Now on the decider of Coastline, the Knights started off positively again, keeping abreast with Wildcard Gaming in a 3-3 first half. But, with the map comparatively skewed towards attackers, and the Knights being on a high from the Theme Park rescue, they surged to a 5-3 lead.

Nevertheless, Wildcard's quality was still shining through as they equalised the score, but the Knights charged forwards in the next two rounds to unhorse the former Oceanic champions and take glory for themselves. 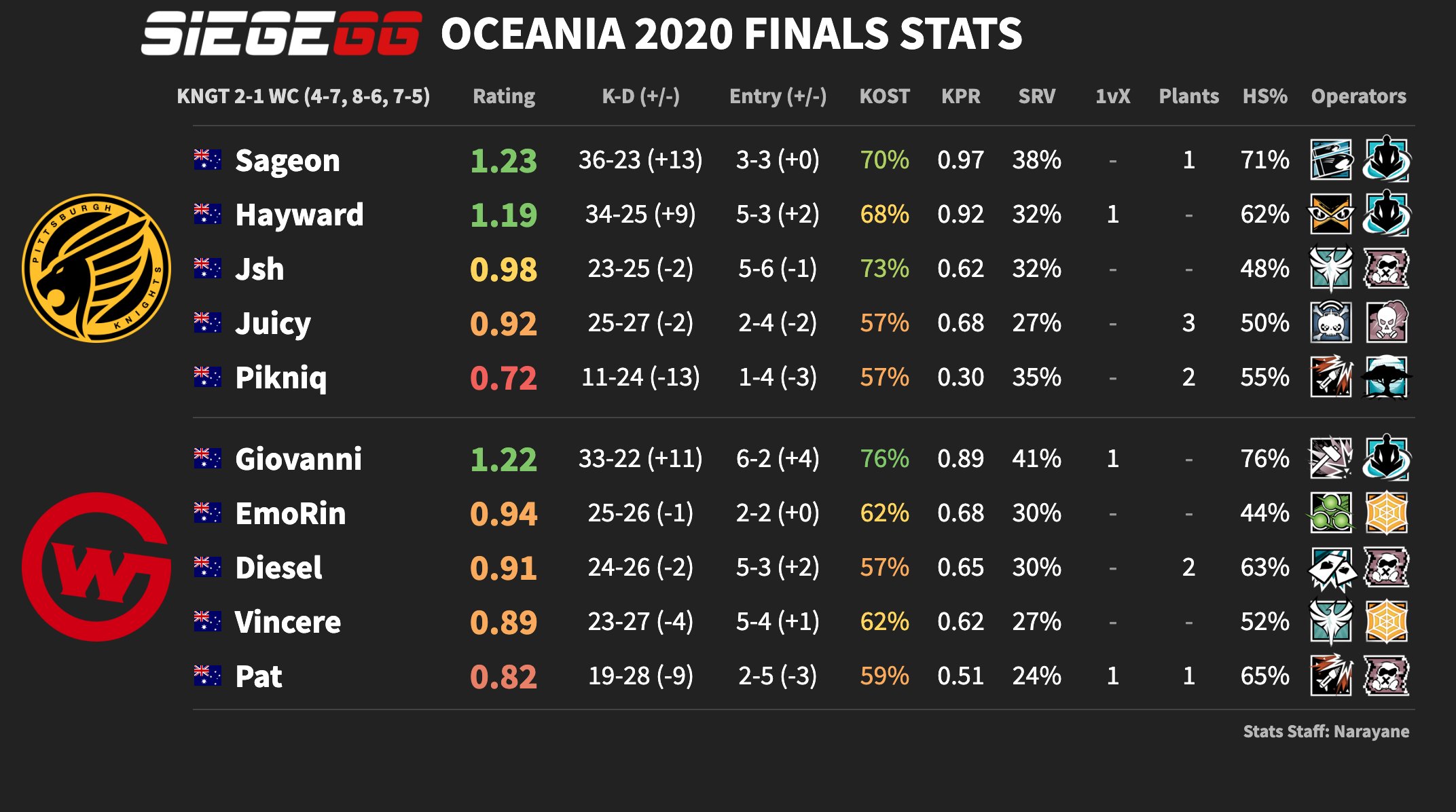 In South Asia, the grand final was closer than the APAC North and Oceanic affairs, played between Union Gaming, the August Major victors, and ex-MercenarieZ (MrcZ), the November Major victors. The match was special in particular for Jamal Qasim "DOC7ER" Khan, who was playing his final competitive Rainbow Six game.

With neither side headed to the Six Invitational, this match had no doubts that both teams were looking to settle the score for good in the 2020 season, and it was ex-MrcZ that delivered the first blow on Oregon.

However, Union Gaming kept pace, with scores equal after the first and second halves. In overtime, then, ex-MrcZ crucially won their first defense thanks to a DOC7ER quad-kill, before needing the 15th round to complete the 8-7 win.

Undeterred, Union Gaming struck back with a vengeance on Villa, taking three rounds on the trot despite starting on attack. While ex-MrcZ did manage to chip two rounds away, they headed into their own attacking half in a 2-4 deficit after Jittery had run rampant through their defenses.

Surprisingly, the story played out similarly, with another 4-2 attacking half. However, the second half saw a 1v1 go in the favour of ex-MrcZ and a 1v2 in the favour of Union, meaning that overtime was at hand once more. This time, though, the ex-MrcZ players took the best parts of both halves, taking the first round and the second -- with DOC7ER fittingly closing things out with a triple-kill.

The 2020 season thus ended with the ex-MercenarieZ squad boosting its chances at finding a new organisation by a large margin thanks to its November Major and APAC Finals victories, though the squad will certainly feel the loss of DOC7ER. As such, the 2020 champions will have a tough road towards a title defense in 2021. 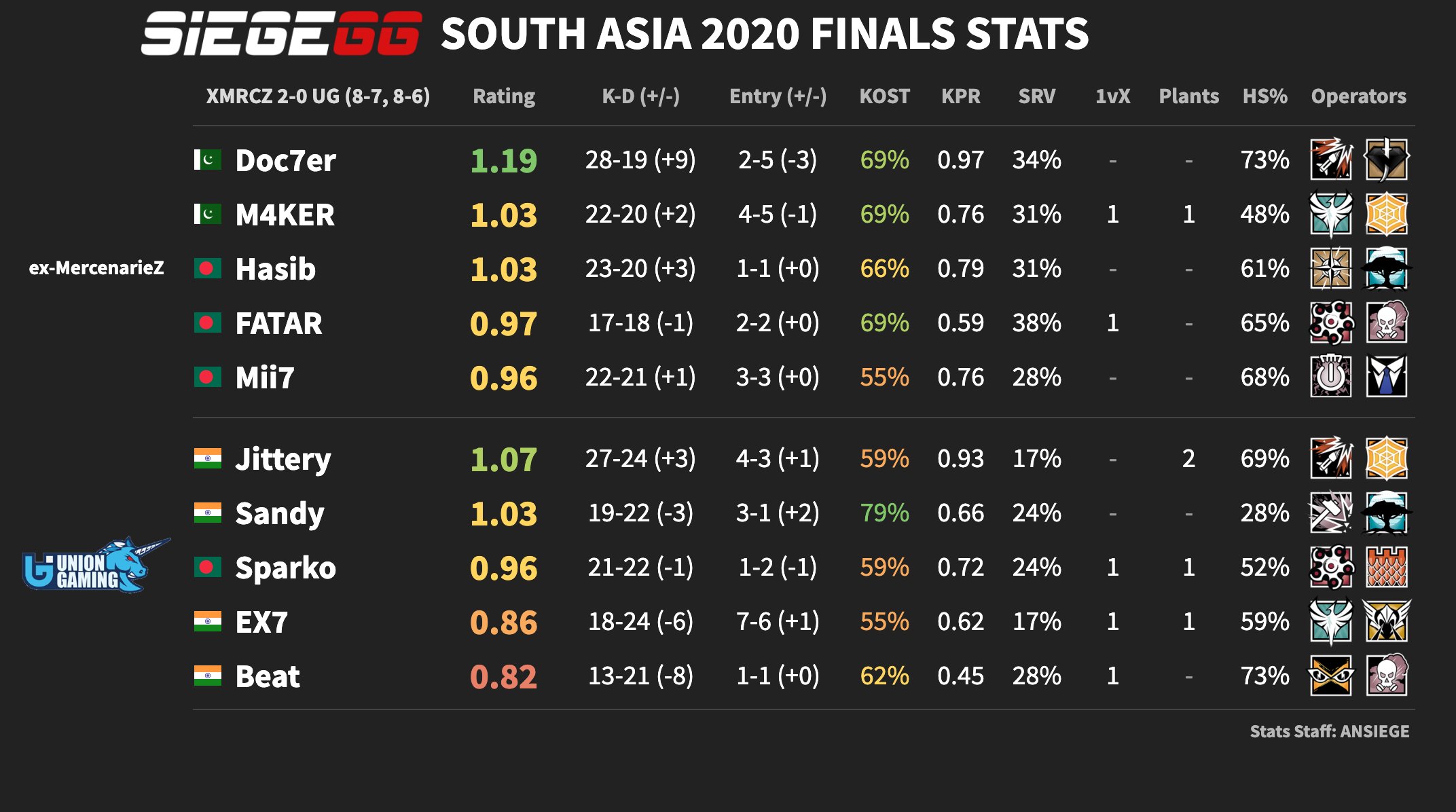 Keep an eye out here at SiegeGG for more coverage of the Finals across the globe, with the European and North American editions yet to come.