Here's a quick summary of all the changes in both APAC North and APAC South after the end of Stage 1 and Stage 2.

As SiegeGG's hub for all roster changes in the transfer window during the post-Stage 1 transfer period, this page will be regularly updated with the latest transfer news. Check out the LATAM, NA and EU threads for changes within those regions as well.

Following the departure of Tsukasa "Merieux" Asano from the team, Nora-Rengo has signed Candy from the Sengoku Gaming roster.

After spending all of his top-flight career on Nora-Rengo, since the Six Invitational 2018 Japan Qualifier, Tsukasa "Merieux" Asano has left Nora-Rengo. His departure comes after Nora-Rengo finished in 10th place in the 12-team APAC North Division, thus sending the team to relegations.

The team is currently set to face eva:e in the APAC North Relegations, with a date to be set some time after the Six November Major. The match is of particular note because former Nora-Rengo player Riku "Maavi" Kaizo had left Nora-Rengo, allegedly acrimoniously, and had joined eva:e right after.

Merieux's departure means that only Toya "Papilia" Miyazawa remains on the team that made it to the semi-finals of both the Season 8 Pro League Finals and the Six Invitational 2019. For his part, Merieux will be retiring from Rainbow Six and will look towards pursuing a career in Valorant instead and is currently looking for a team.

His exit at this stage also leaves Nora-Rengo needing to gel with a new player ahead of their relegation game against eva:e. However, with no scheduled matches for the team to do so, until that game, the former APAC champions may be looking at relegation from the APAC North division for the 2021 season.

After one year coaching the Thai players of Qconfirm, Tan "Tanler" Manosamut has left the team.

Just a day prior to the start of Stage 2 of the APAC North Division, SCARZ has released Sanghoon "yass" Yoo after his contract expired and has signed Heejae"nosferatu"Jun and Chanhyoung "C0LDBRO" Son. The move aims to avoid relegation for the Season 11 Korean Pro League champions, after they finished dead last after a mere two wins -- a situation they described as a "humiliation".

Making way will be Takumi "JJ" Iwasaki, who will be moving to the bench and will continue on as a streamer for the organisation as well.

The change comes after a third place finish in Stage 1 of the APAC North Division and is likely aimed to dethrone the leaders of Cloud9 and Giants Gaming.

Familiar to Rainbow Six audiences, the organisation of Noble has now signed the former Team SiNister roster, known in the interim as Melon Cat. Also signed, presumably turning 18 years of age by the start of the Oceanic Nationals 2020, is Presidnt, filling the vacant spot left by the departure of Vincere.

Okami has now become the latest Oceanic team to spring into action with a roster change, bringing back the former Fnatic player Ryan "Speca" Ausden in from the cold. Outgoing from the team is Joshua "Mangoz" Scott, who had been on the team since the start of Season 11 of the Pro League.

Speca, for his part, had not been seen in the top-flight since being dropped from Fnatic after a disastrous few months that saw the team crash out of the Six Major Raleigh and fail to make it to the Season 10 Pro League Finals.

During his time with the team, while Fnatic had finished at the top of the ANZ Pro League, their qualification to the APAC Finals itself was in doubt at one point and the team lost to Aerowolf in the quarter-finals. He did have success with Fnatic, though only domestically, as the team was victorious at the Six Masters 2019.

Now, it remains to be seen how the time off has treated Speca, and whether Okami will be able to close the gap to a Wildcard Gaming also in flux, having finished second in the Six Masters 2020, and shake off its shock loss to the Pittsburgh Knights in the Six August Major 2020.

Wildcard Gaming captain Ethan "Ethan" Picard has left the team due to personal reasons and his health. A replacement already seems to be lined up, but Ethan's presence on the Wildcard roster will certainly be missed.

The team marked a resurgence as of late, having severely underperformed in Season 11 of the Pro League and at the Six Invitational 2020. Returning back home, changes in personnel meant the team rocketed straight back to the top in the wake of Fnatic's departure from the region, finishing top in the Six Masters 2020 and also winning the Oceanic Six August Major 2020.

After finishing in the last place in the 2020 Six Masters tournament, James "Spruce" Feaver has retired citing issues with the game and lack of motivation to continue:

Over the weekend I decided to step down from the Kanga roster and retire from the game. There were a few reasons as to why I decided this was the best decision for myself and the team. The main reason was the fact that I really didn't enjoy playing the game anymore. The current meta to me is boring and tedious and I think the game will only continue to grow in this way (at least to me). This in turn effected my motivation, which I knew would eventually begin to effect my performance, and I didn't think it would be right to hold the team down.

I'm also not being paid to play the game and I just recently turned 22. Funnily enough one day I hope to own a house and be independent and this is in no way attainable unless you're in one of the top teams in all of APAC. I've been grinding at the game now for about 2 1/2 years on PC and I know now that I will never be on one of those teams nor have the motivation to help bring Kanga to be one of those teams. Funnily enough over the last 3-4 months I felt like i'd been playing and developing more than I had over the previous year, but sadly that didn't seem to make me any happier....

One of the best-known players in the Oceanian region, Josh "Warden" Wadham, has retired from competing after three years. In this time he attended two APAC LANs and finished as the runner-up in two Australian National tournaments. Most recently, he joined the Ferox lineup for the 2020 Six Masters season in which his team finished in sixth.

I bought rainbow six on the 26th of September 2015 after playing the closed beta for a day and I have loved every moment of it but it is time for me to move on. Over the last couple of months I have lost all motivation to play and am no longer wanting to commit the time required so I have decided to step down from the team.

...I have enjoyed every moment of Comp and am so thankful to have been apart of the scene since it begun as well as watching it grow to what it is today. It was a pleasure meeting everyone online and at events and was so good to meet people I had been playing with for years and without Siege that would have never happened... 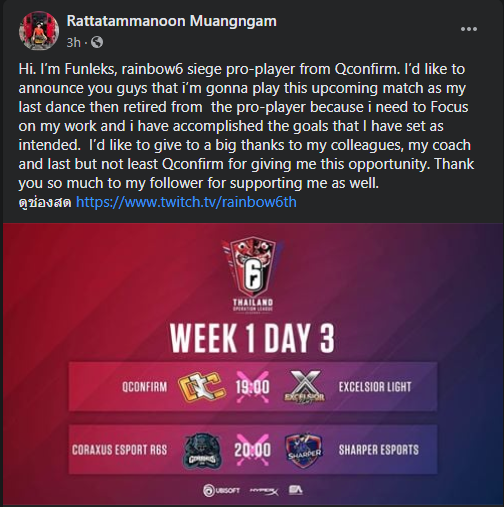 Ahead of Stage 2 of the APAC North Division, Rattatammanoon "Funleks" Muangngam has announced his impending retirement from the game. Following the third day's game against Excelsior Light in Season 3 of the Operation League Thailand, Funleks will no longer be part of the active Qconfirm roster.

The move comes after the four-times running Southeast Asian Pro League champions only finished in eighth place amongst 12 teams in Stage 1 of the APAC North Division. Set to replace him in both the top-flight and domestic competions is current substitute Parin "Roldinii" Boonnart, with the Thai team now looking to secure a new substitute as well.

While Roldinii has not played in the top-flight, he has been around the domestic circuit, having played a fair few games to build up a reasonable amount of experience. Additionally, Roldinii had been a substitute for Xavier Esports. Despite his relative inexperience, though, this fresh approach may just be what Qconfirm is looking for to revitalise its fortunes in Stage 2 and match expectations.

APAC North side Electrify Esports has benched Zong Min "Flash" Lin in favour of promoting substitute Kuei En "Sino" Lee to the main roster. The move comes after Electrify Esports finished Stage 1 of the 2020 season in 10th place, with both its wins only coming in the first half. After a dismal 0-5 second half, the team has sprung into action with a roster change, aiming to avoid relegation.

Just over a year after acquiring the roster, Team SiNister has dropped the team after they finished the most recent Oceanic nationals season in fourth place, just missing out on the "Mini-Major" event that followed. This is as the organisation seemingly looks to focus on their R6 content creators going forward.

And so, that's every change within the Asia-Pacific region so far in this transfer period. Check back here for more updates over the coming days!