With Stage 1 of the LATAM 2020 competitions underway, SiegeGG has a look at what happened in the previous week and what to expect in the upcoming play days.

After a week full of great matches, especially the clash between Ninjas in Pyjamas and Team Liquid, the LATAM region has offered us more exciting matches in this second week. In Brazil, Team Liquid has jumped to the first place. There's a triple tie for first place in Mexico, meanwhile, in South America, Coscu Army is leading the standings with one game in hand to their immediate pursuers.

After drawing in their debut game against Team Liquid, Ninjas in Pyjamas’ second match was against one of the other favourites to make it to the top-four, MIBR. The game started with a big surprise in the first map, Oregon, as NiP decided to ban Montagne despite Psycho being famous for his usage of shields -- and doing the same on the second map later.

The match started great for the Six Invitational 2020 finalists, as they won three of the four first defensive rounds. However, from there, NiP was the weaker side. MIBR took control of the game after winning their attacks onto Kitchen/Meeting and Kids, highlighting a cameram4n clutch in the fifth round as he killed the last defender with only one second left.

The ex-FaZe Clan player's great momentum helped his team in its first defensive round, as MIBR decided to play with Tachanka. Although Kamikaze successfully planted the defuser, cameram4n and CYBER -- with Mute and Tachanka, respectively -- knew how to solve the situation, as CYBER got one kill and cameram4n two.

MIBR looked very strong and got to match point, but NiP responded with a great attack onto Laundry. However, MIBR adapted its defense and knew how to close out the match in the next round after successfully protecting Freezer.

The match ended on Villa, with NiP getting an easy win there -- 7-2  -- after winning five out of its six defences.

The second game of the day ended with another draw, this time between FURIA and Black Dragons. The recently promoted team, FURIA, won the first map with a great display on Theme Park, being superior on defence and on attack, with the new map not exactly the easiest to pull off such feats on.

The script was the same in the second map, but this time was Black Dragons who dominated the map. In Kafe, a defensive map, Black Dragons won all of its attacks after the first half ended in a 4-2. 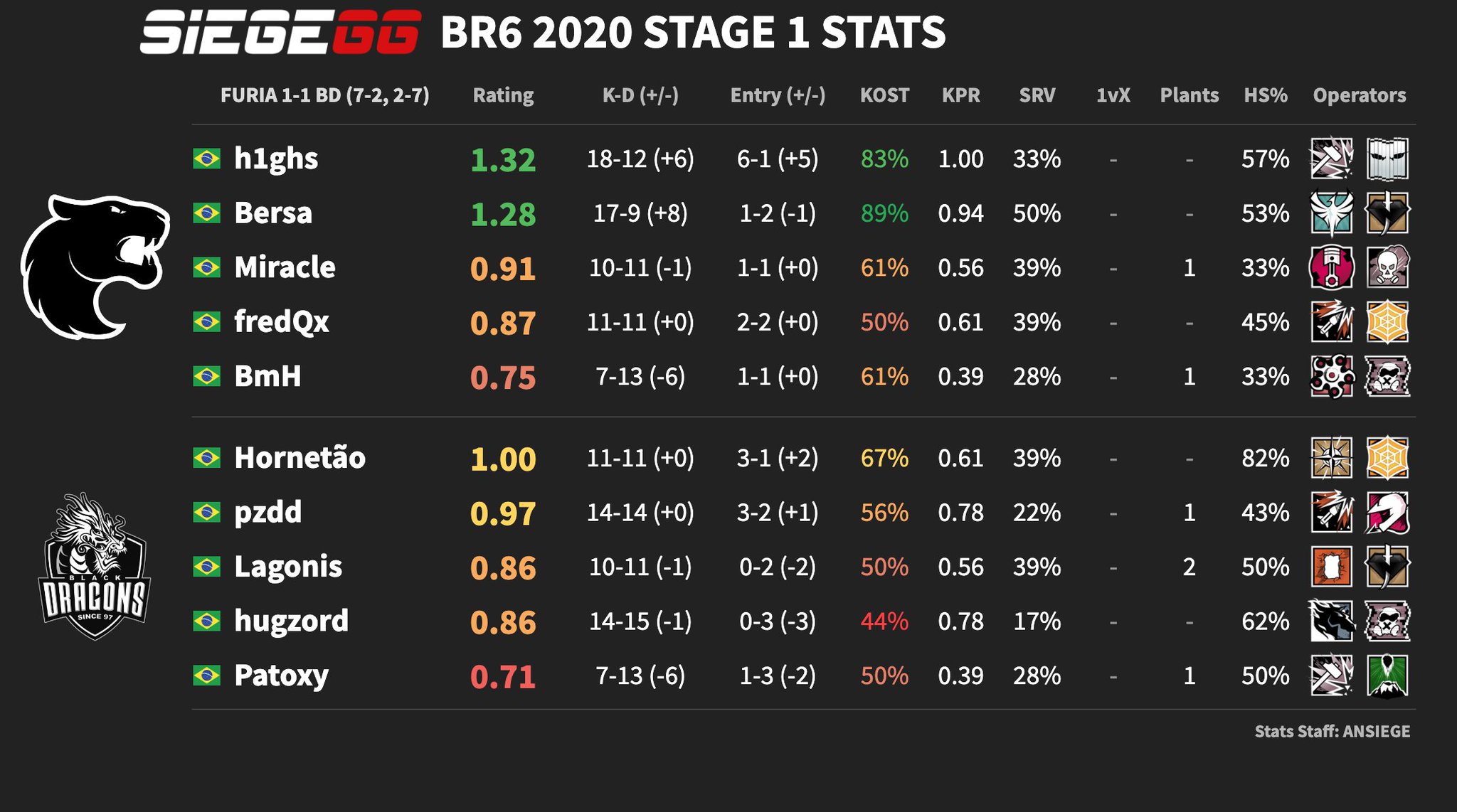 The last match of the day ended in a 2-0 win for FaZe Clan, something that it had really needed as its record until then had just been comprised of a partial win against MIBR and a loss against Team oNe. Their rivals were W7M Gaming, one of the recently promoted teams.

The first map played was Oregon, which was won by FaZe Clan (7-3). The second map was even more one sided, 7-2 on Clubhouse, as FaZe Clan successfully won each one of its attacks.

The second day kicked off with a clash between INTZ and Team Liquid, which ended in a partial win for Liquid. The first map, Clubhouse, ended in a draw, after Liquid tried to defend the Church/Armory site without Jäger and with Wamai being banned. Much as expected, two of these three defences ended in the attackers’ hands. The first half ended in a draw as INTZ won its first attack onto the CCTV/Cash site.

INTZ decided to play the Armory/Church sites without Jäger and also ended up imitating their opponents’ results -- two rounds lost and one won. With the match point staring the INTZ players in their faces, they reacted and successfully stopped each one of their opponents’ attacks. The final round ended with a triple kill from Al3m4o with Smoke as things were tied, but the second map was very one sided, as Liquid won 7-2 on Kafe after winning three attacking rounds.

The following match featured Team oNe and NiP. The first match started with a 7-4 win for NiP on Theme Park, a match where NiP banned Jäger in what proved to be key for the win.

However, the second map ended with a very unexpected result. Playing on Oregon, Team oNe won by a 7-0 margin -- the first one of the season. Team oNe started on defense, and although the first two rounds were very close -- the first one ended on time and the second one ended in a 1v1 situation -- the rest were pretty one-sided, especially the defences in Kitchen/Meeting. The last round of the game ended with Julio protecting the defuser in Bunker as with three seconds remaining, he got his second kill and third kill of the round, but FelipoX secured the clutch with only one second remaining to consign NiP to its third draw.

The last match of the day started with another 7-0, as MIBR beat Santos comfortably. After winning their six attacks in Kafe, MIBR then closed out the match with a defence on Library using operators such as Alibi and Frost. The second match was then played on Clubhouse and even though it was a close one, MIBR successfully won the match by a 7-5 margin. 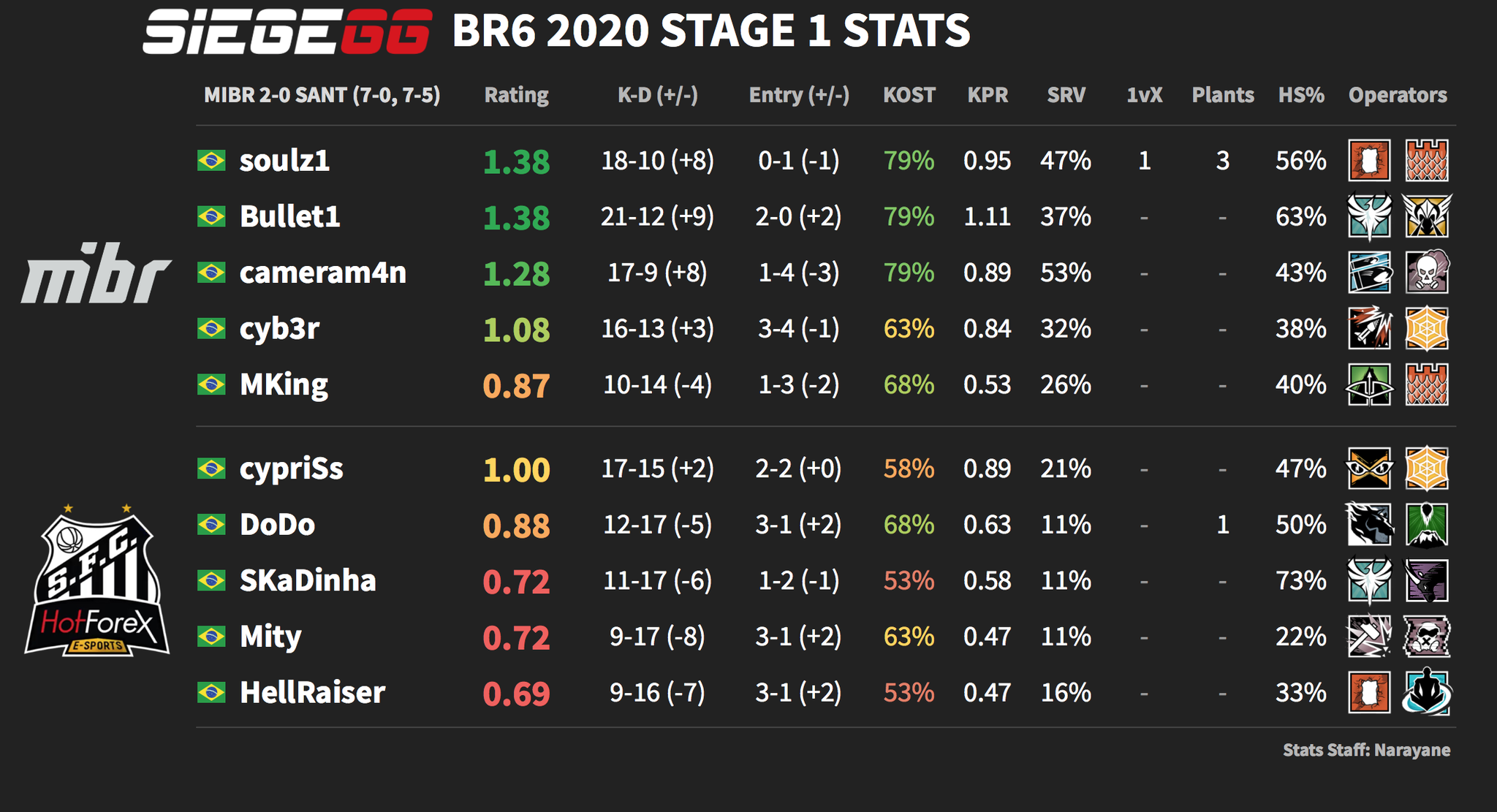 The last day of the week offered us the games of Team Liquid, FaZe Clan, and Ninjas in Pyjamas, which were the favourite teams in the region. The first game was between Team Liquid and Black Dragons and, although Liquid won 2-0, the two maps were reasonably close (7-4 on Oregon and 7-5 on Consulate). Muringa, Paluh, and Nesk's displays were key, as the latter ended with 12 and 14 kills on each map, respectively. 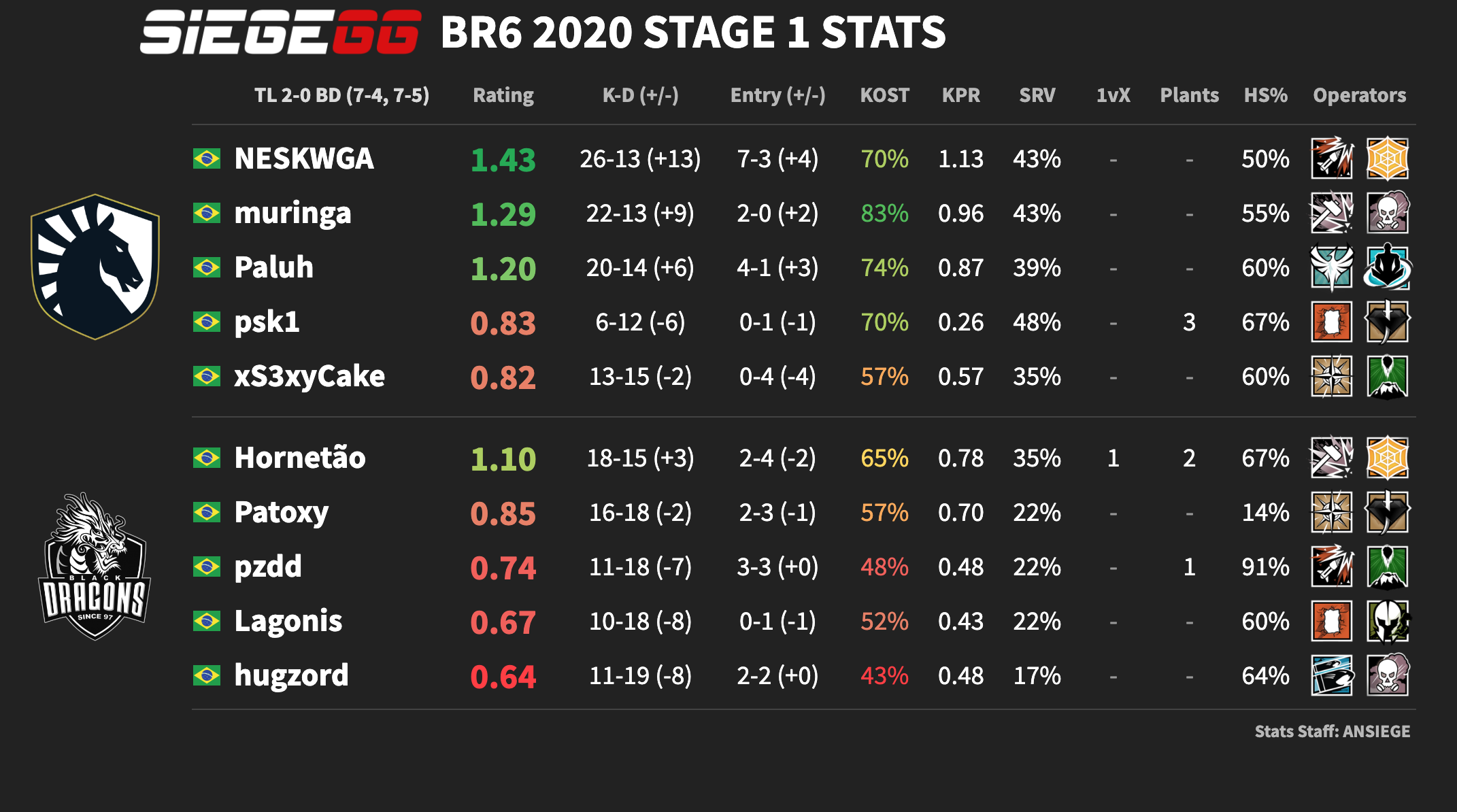 The second match of the day ended in a partial win for FaZe Clan against FURIA. This match was a special one for Twister, FURIA's coach, as he faced off against his former team for the first time. The first map showed us a strong FaZe Clan that achieved match point on the ninth round, however FURIA showed some resistance as it forced the match to go to the very final round, though FaZe was still victorious. The second map was the opposite, as FURIA got to match point in the tenth round. This time, though, the Clubhouse map ended in a draw.

The last game of the week saw NiP and W7M Gaming take each other on. Although the Ninjas were the favourites, both maps ended in close 7-5 wins for them. The Six Invitational finalists always had the control of the match, but weren't able to close the maps until the very last rounds.

Mexicano - Triple draw at the top between Pixel, Estral, and Atheris

Until now, the Campeonato Mexicano has offered us very exciting matches, with predictions hard to make. This can be seen in the results, as after twelve matches played, only two of them have ended in decisive wins.

The week started with a dominant double-win from Pixel against Infinity Academy, with the former taking the Kafe map 7-1. The first map had been a close one though, as Pixel had won 7-5 on Villa.

The second game ended in a Estral Esports partial win against Chivas, as the former won 7-3 on Clubhouse and 6-6 on Consulate. Estral kept banning Mira, something that it has done in seven of the eight maps played so far, and banned Ying, something that had been also done by TIMBERS the week before.

The same TIMBERS won in the following match, securing a partial win against the previous leaders, Atheris, as they drew on Kafe and won on Coastline (4-7). TIMBERS won five offensive rounds on the Spanish map, which was key, as the team only won two of its six defences.

The last match of the week ended in a draw between Infinity Academy and Chivas, as Infinity lost the first map by 2-7 but successfully won on Villa by a 7-5 scoreline.

These results leave Pixel, Estral, and Atheris at the top of the table with five points each. Infinity Academy is fourth with four points, while TIMBERS and Chivas are fifth and sixth with three points. MeT, who didn't play this week, is at the bottom of the table with one point. 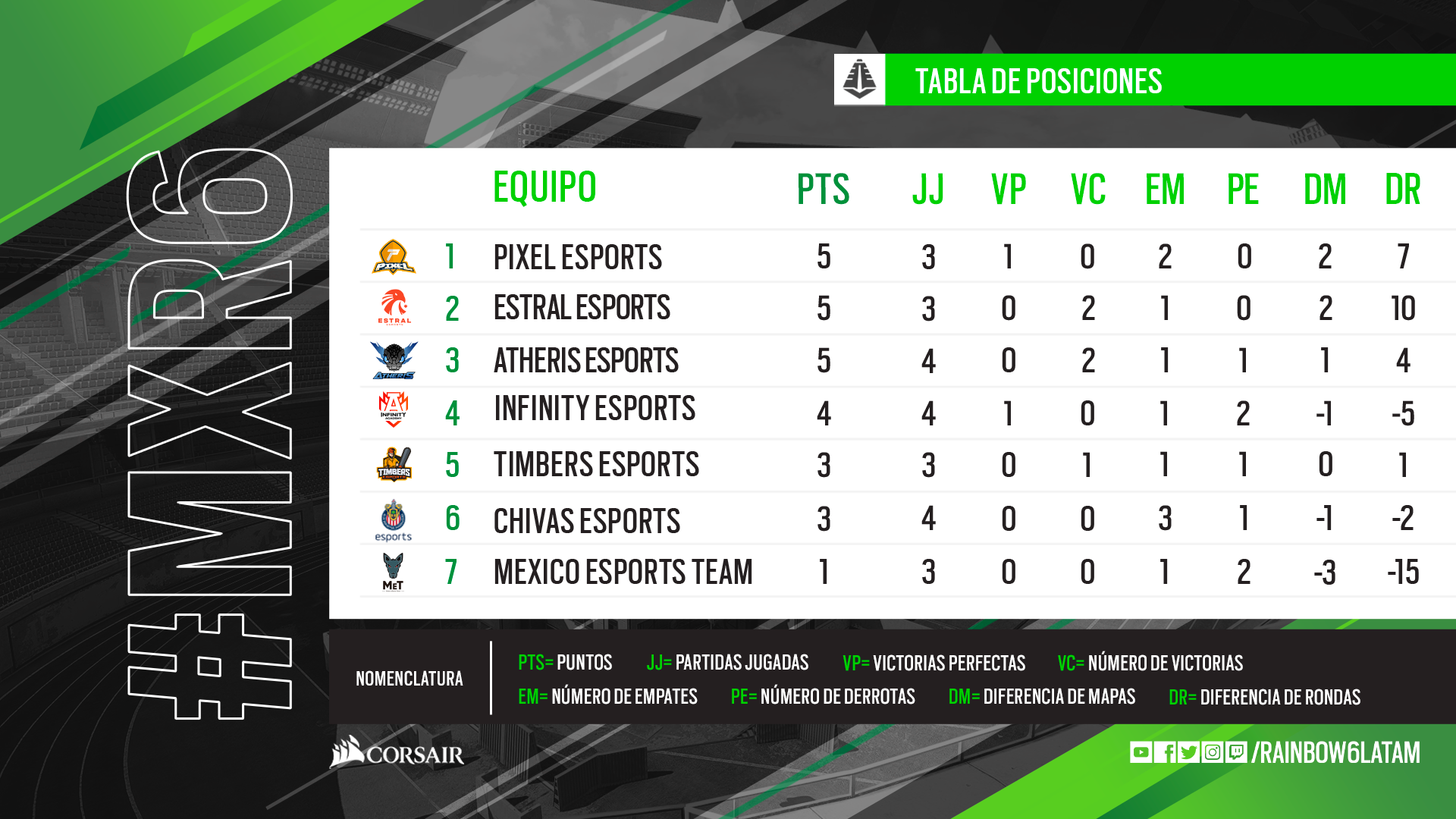 After the first week was delayed due to technical problems, the Sudamericano started on Friday as they decided to start with the second week's games. Between Saturday and Sunday, the Sudamericano offered us six matches with the same format as shown in the Brasileirão and the Mexicano.

On Friday, we saw the only draw of the game-week, between 9z Team and Malvinas Gaming (4-7 and 7-4). The rest of the matches ended in total wins, except the LBS against Nocturns Gaming match, where Nocturns got a partial win.

Also exciting was the 9z vs Furious Gaming clash, as the former team got a partial win (7-5, 6-6). This could be a very important result, as these are considered to be two of the best in the league.

Infamous Gaming and Malvinas Gaming then featured in the following match, as the Argentinian roster got a 2-0 win against the Peruvian one. Coscu Army then won against LBS in the third game of the week, while Nocturns Gaming and Azules drew. 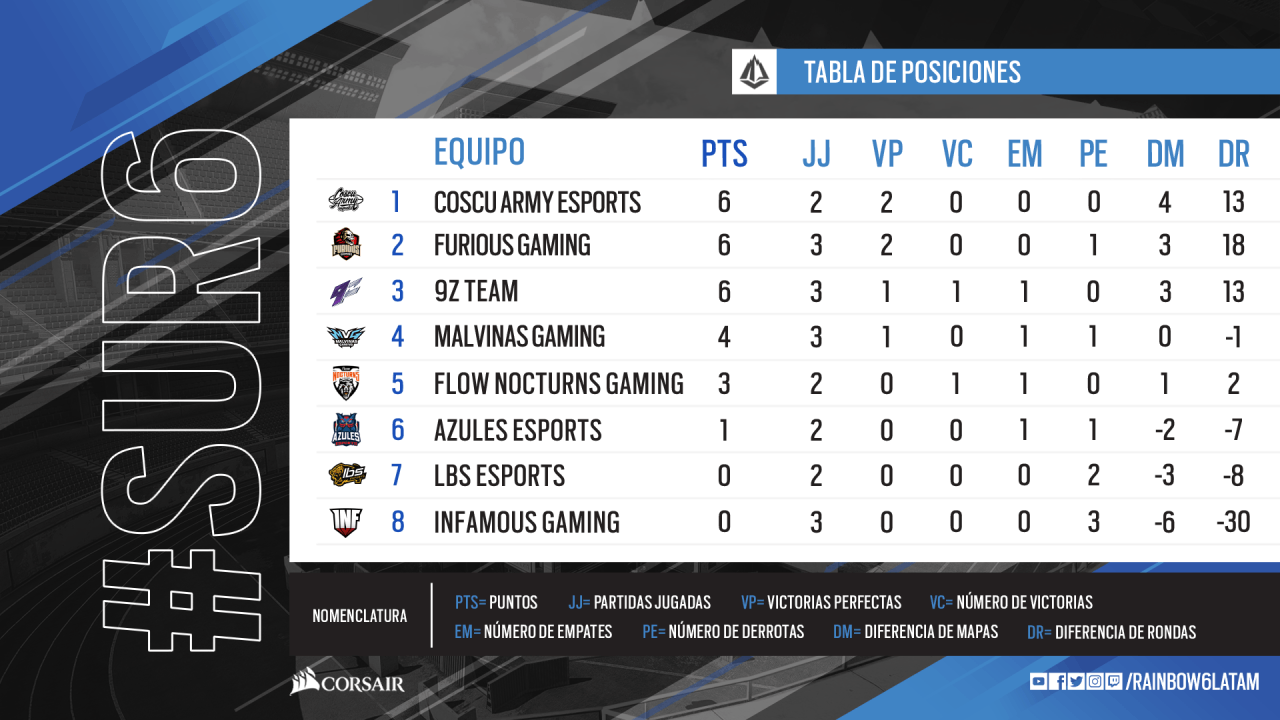