With Season 11 entering it's midseason Six Invitational break, let’s take a look at the best action over the week in the NA, EU, and LATAM regions.

With the fourth and final week of the Pro League before the Six Invitational done and dusted, here's our pick of the action here at SiegeGG in NA, LATAM, and EU, with the weekly APAC Preview and Roundup being released separately.

With the final play day before the Invitational, Week 4 in Europe gave us a classic showdown in the region: G2 versus Team Empire.

Playing on Coastline, Team Empire started the match on attack. The game started quickly, with a UUNO run out opening the match, leading to G2 taking the lead early. G2 then won the second round due to time, before Empire were able to finally get the engine going in round 3, putting the scoreline at 2-1 in favor of G2. G2 would then trade rounds back and forth with Empire, putting us at 4-2 G2 at the split.

On attack, G2 were the first to break the seal on Lion, an attacker who, while already being relatively strong in a coordinated team, is amplified on a map like Coastline where the attack has many avenues to cut off rotates and roamers. Despite this, Joystick did what Joystick does, and scored a 3k at the end of the round to shut down the attack and win the round for Empire, despite the man advantage for G2. The following round, Shepard was on the receiving end of an unlucky glitch, wherein he fell through the map and Empire were thus placed in a 4v5 from the start. Despite this, Empire impressively won the round, leveling the scoreboard at 4-4. At this point Empire had the momentum and looked like they may be able to put this match away. This would not be the case. G2 went on to win the next three rounds on attack, and won the match, 7-4. 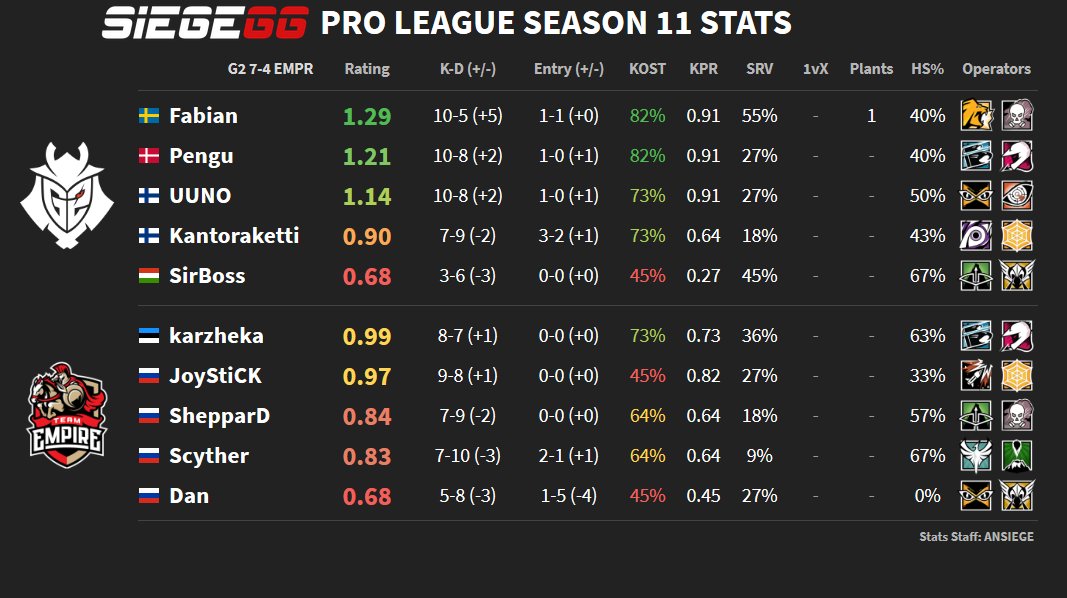 The results through the rest of Europe were also similar. Rogue defeated ForZe, 7-5. Vitality continued to apply pressure to the top 2 with a win over Chaos, 7-4. Finally, Na’Vi, working to get their season back on track, won against BDS, 7-4.

In North America, Playday 7 provided entertainment for some and misery for others. One of the more exciting matchups in the region was Team Reciprocity versus eUnited.

Starting on attack, Team Reciprocity looked to be in a decent position as they planted the defuser in the first round. However, poor positioning and lack of intel allowed eUnited to counter-defuse despite Team Rec still having players alive and trading out evenly. Luckily, a lengthy rehost allowed both teams to regroup after a fairly sloppy round. eU won their second defense, before Rec rebounded to win their first attack of the half. eUnited followed up with another defense win, then traded the remaining two rounds of the split with Rec. The half finished with eUnited in the lead, 4-2.

eUnited opened their attacking half strongly, winning two and putting themselves on match point up 6-2. Their lead looked to be in peril when Team Reciprocity began to chip away at what appeared to be a lock for eUnited. Two rounds later, and it was 6-4 with Rec looking to be the better team. Unfortunately, the comeback was not to be, and eUnited finished out the match, winning 7-4. 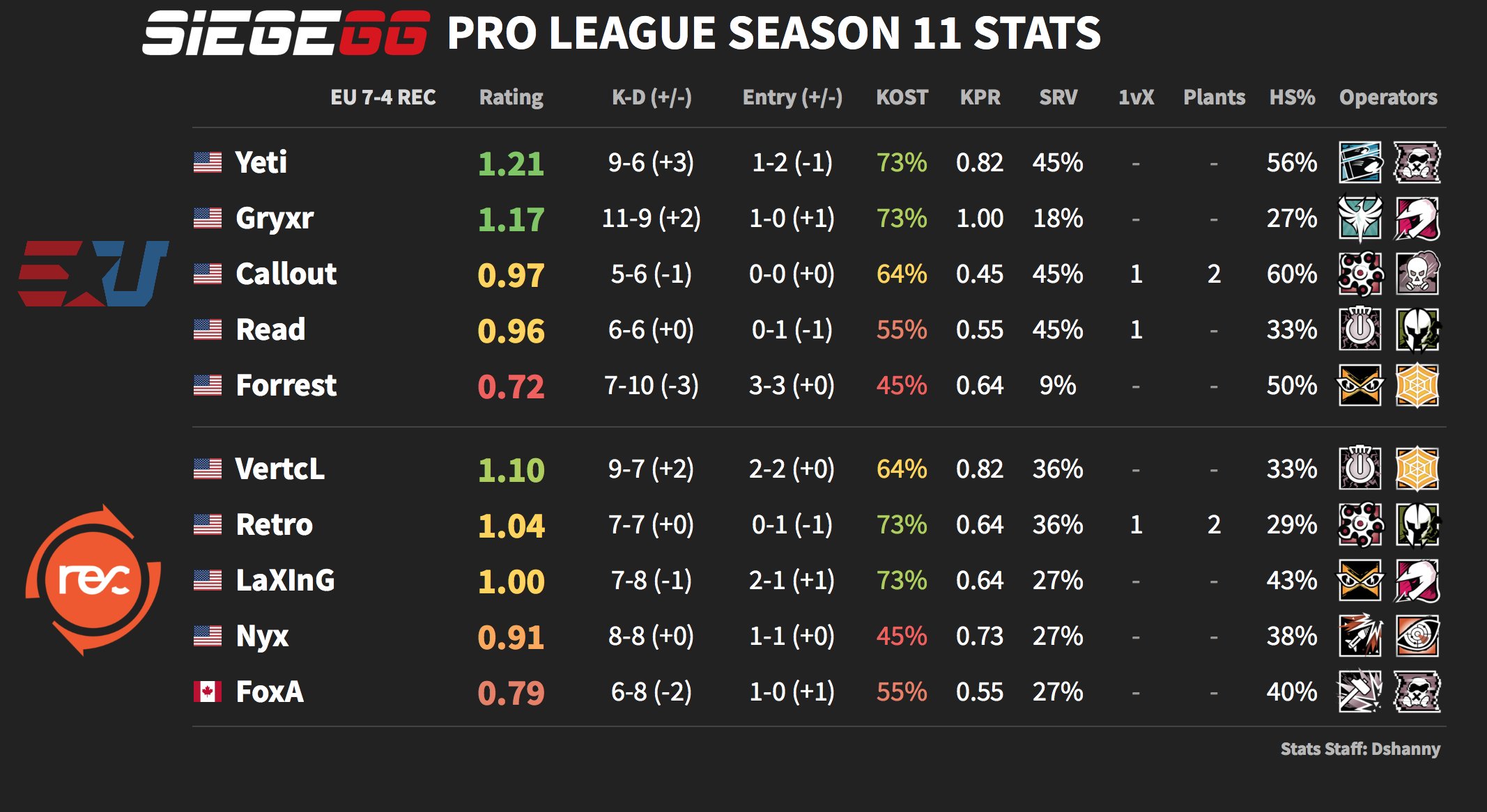 Across the rest of the region, TSM triumphed over DarkZero 7-2, which really leaves some question marks for DZ heading into the midseason break and Six Invitational. At the bottom of the table, Tempo Storm put forth a good case as to why they are not the lowest team in the league, as they routed EG, 7-2. Finally, in a defensive affair, 10 of the 12 rounds were a defense win between SSG and Luminosity, drawing 6-6.

Latin America witnessed two titans of the region clash, as FaZe were set on a collision course with Team Liquid in what promised to be an entertaining affair before the Six Invitational.

Starting on defense, Team Liquid won the first round handily. The following round was won by FaZe, who, it should be noted, were running Finka, an operator who is traditionally neglected by competitive teams. In a relatively balanced split, the teams continued to trade round wins and close out the half 3-3.

On the back half of the match, defense again struck first as FaZe Clan pulled ahead early against Liquid. From there though, it was all Team Liquid as they stormed ahead winning three round straight onto match point. FaZe managed to pull back one round, but it was too little, too late as Liquid won the final attack to get themselves across the finish line, 7-5. 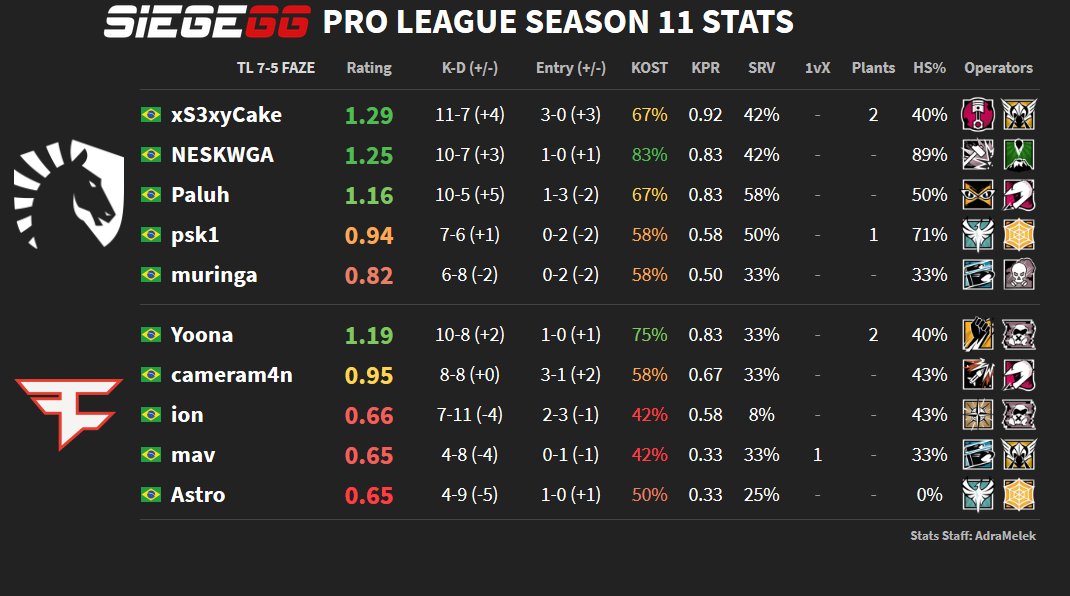 Across the rest of Latin America, NiP defeated a relatively in-form Elevate, 7-3. MIBR continued their inconsistent season, recovering from a loss and draw the previous week to win against Black Dragons, 7-2. INTZ have been slowly losing their early season magic, as the team drew against Team oNe.