With the Pro League well back in action for Season 11 in APAC, and games spread all across the four subregions, there was much anticipation and trepidation for fans on offer in the third week. With Cloud9, NORA-Rengo, and Wildcard Gaming already showing signs of trouble, it was not looking impossible that all three teams failed to repeat their APAC Finals appearances from Season 10.

Kicking off the APAC action for the week was the ANZ region as per usual, and it did not disappoint. With Mindfreak and its roster having parted ways with each other, a first game as “TBD” against HomeLess did not get off to a great start, with the Pro League rookies crushing TBD 7-1 on Border. TBD fired back on Consulate, though, decimating HomeLess 7-2 there to remind them of the experience on their side.

While exciting, the true challenge was to come for Wildcard Gaming. Going up against FURY -- the team that had virtually gifted Wildcard a spot at the APAC Finals last season -- was supposed to be an easy affair. However, FURY came out swinging, upsetting Wildcard 7-5 on what was one of Wildcard’s best maps, before piling on the misery with a draw on the second map of Kafe. The results all but guarantee Wildcard will miss the Season 11 APAC Finals, save for a near-miracle in its remaining three games.

While Fnatic would be run close by FURY the next day, only winning 7-4 and 7-5, Wildcard’s misery would continue as the second-seeded APAC team would only secure four points against Team SiNister, drawing the second map to close out its first split. This week, Onxyian 2.0 features twice -- first against FURY, the team that had denied them an APAC Finals spot last season, and then against HomeLess -- in what are to be some exciting games, while TBD also plays twice against Kanga Esports and then SiNister. 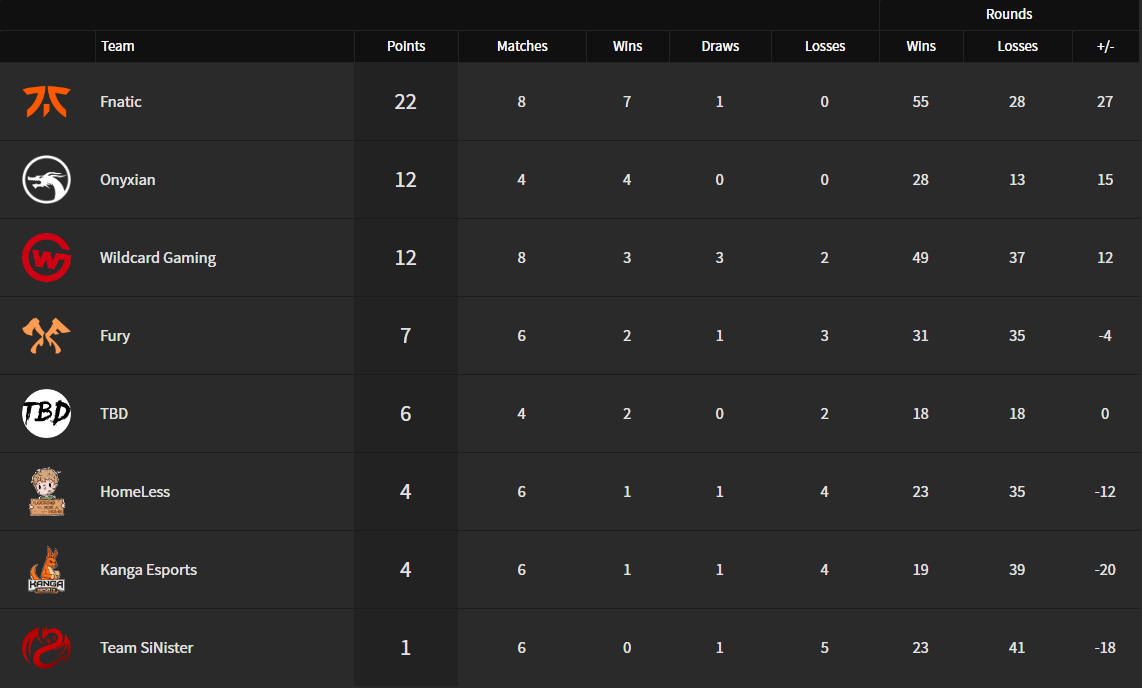 Over in SEA, Scrypt E-Sports took on the tough challenge of Giants Gaming -- and got fairly close -- only losing 4-7 on Kafe and then 5-7 on Bank, with the APAC champions still seemingly sorting out a place on the team for their newest member, jrdn. Team 1122 then scored its first points in the Pro League against fellow Pro League rookies 200 Degrees, avoiding a repeat of maps for the first time this season, winning 7-2 on Clubhouse and then 7-5 on Bank.

Qconfirm then wrested the provisional lead back from Giants Gaming, beating Lese Esports 7-4 on Consulate before winning 7-5 on Clubhouse (in a carbon copy of the Giants’ game the previous day) but looked shaky nonetheless. However, the true surprise was yet to be sprung. Valor eSports, having lost to the Giants 3-7 and 3-7 the previous week, was expected to lose to the arguably second-best Xavier Esports squad. However, the Singaporeans flipped the script, winning 7-4 on Clubhouse, but could not do the double, losing 3-7 on Villa.

This week, keep eyes peeled for another Challenger League matchup come to the Pro League, when the two buoyed squads of Valor and Team 1122 take each other on, while 200 Degrees faces another stern test against Lese Esports. The true titanic battles will be on Thursday, however, with Xavier Esports taking on Giants Gaming and Scrypt going up against Qconfirm in what is shaping up to be a long-term rivalry. 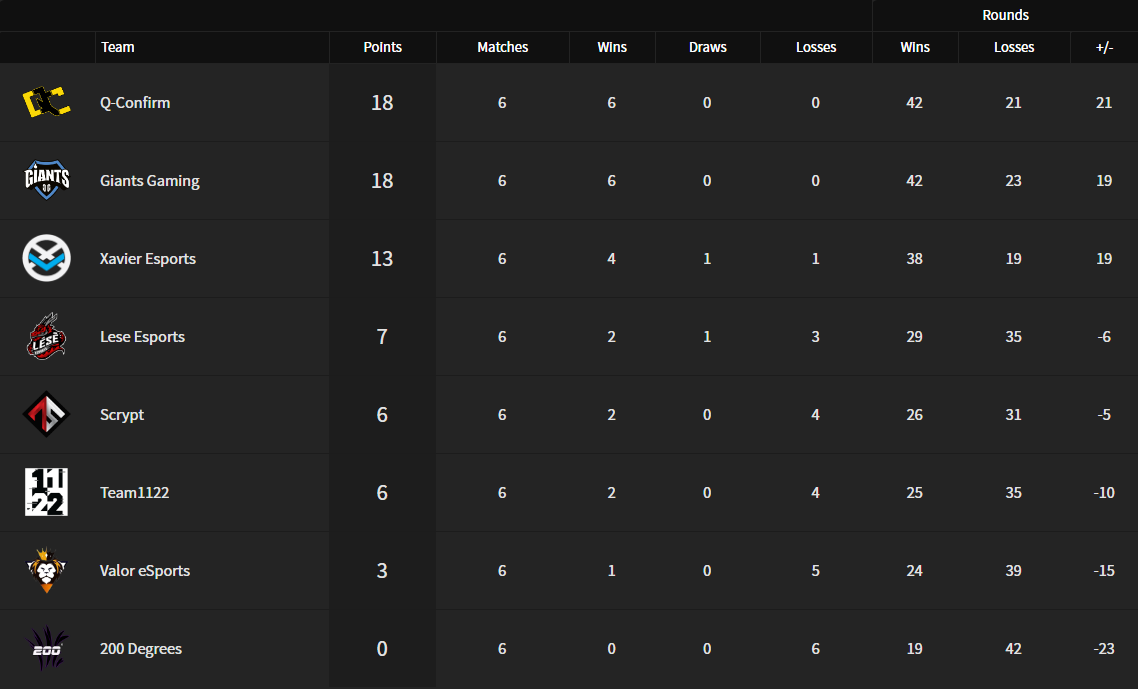 Over in Japan, the surprises only got more numerous. Unsold Stuff Gaming (USG) stunned GUTS Gaming 7-2 on Consulate before getting shut down 1-7 on Villa, similar to TBD and HomeLess, before FAV was held to a draw on Coastline by DetonatioN Gaming (DNG). DNG could not maintain the pressure though, and capitulated 2-7 on the second map, Kafe to virtually end their pre-season hopes of qualfication to the APAC Finals.

Dreams would continue to be crushed the next day as well, as NORA-Rengo (NR) was greatly frustrated by Takumi Festival LBX, only managing to draw both maps to virtually confirm a miss of the APAC Finals for the first time in its history. Cyclops Athlete Gaming (CAG), on the other hand, had no such issues, taking down Yoshimoto Gaming Lamy (YGL) 7-1 and 7-2.

This week, keep an eye out for a set of exciting matchups, starting with CAG going up against FAV in a match that could give NORA-Rengo a way back into the fight, while NR itself plays DNG. The next day, YGL takes on USG, and the first split for Japan closes out with GUTS Gaming versus Takumi Festival. 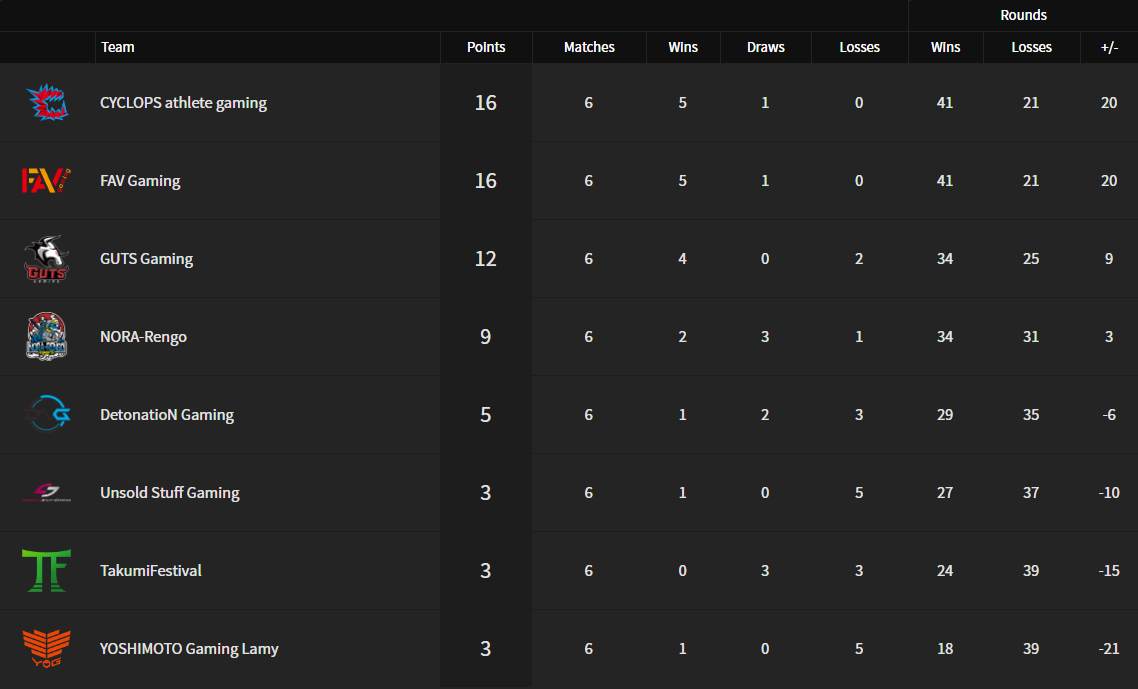 Finally, Cloud9 and South Korean fans got some respite, with the experienced roster taking down a messy TRIPPY team 7-4 and 7-4, while SCARZ piled on the misery with two 7-5 victories against TRIPPY as well. The results virtually guarantee that Cloud9 and SCARZ will be playing at the APAC Finals, though things are not set in stone yet.

This week, catch SCARZ taking on Axiomatic on the Wednesday, while TRIPPY gets a second chance against Cloud9, though it is unlikely that Cloud9 loses.