With the third week of the Pro League done and dusted, here's our pick of the action here at SiegeGG in NA, LATAM, and EU, with the weekly APAC Preview and Roundup being released separately.

With Europe kicking the week off as per usual, the best game to watch was between the unpredictable Chaos and the resurgent Team Empire.

Playing on Bank, the defenders of Chaos would draw first blood but Empire would strike back immediately and would so begin a back-and-forth. Dan would give his team the lead with a masterful quadruple-kill, but an odd Caveira pick played in server would net two kills as Chaos would tie things up. Dan would nearly wrest the lead back with four kills again, but would be stopped at three in a tense 2v1 for Chaos before an ill-advised Open Area defense would see Empire equalise.

A bold triple-kill from Sha77e would be stopped by Dan and JoyStiCK, though Renuilz would use the Withstand ability on Zofia to nearly win a 2v1. Empire would then extend the lead with a stronger defense but a misplay from Dan would allow Renuilz to win an unlikely 2v1. Redgroove would then nearly pull a 3v1 back, only to be denied the last kill by time, and Empire would finish things off with a near-flawless defense to win 7-4. 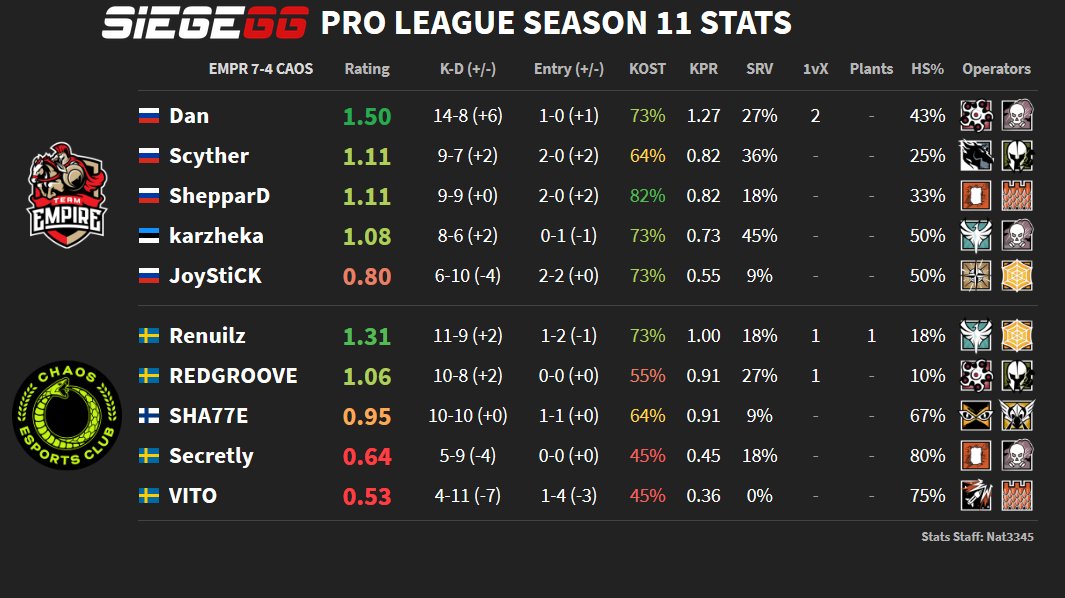 In Europe, the best viewing of the week was a match between Rogue and G2. On Clubhouse, defense was king, as there were a total of 9 defense wins to 3 attack wins.

G2 fired the opening salvo, with 3 straight round wins, capped off by a 1v3 clutch by UUNO. Rogue were then able to find their footing, winning their first round to make is 1-3. G2 and Rogue traded rounds after, and finished the split 2-4 in favor of G2.

The swap allowed Rogue to get the momentum they would need to, eventually pulling off the comeback. Following G2’s start, Rogue won 3 rounds to start their defenses, going up 5-4. G2 rebounded, tying the match up, 5-5. It would not be enough for G2 though, and Rogue would win the following 2 rounds to eventually win the match, 7-5. 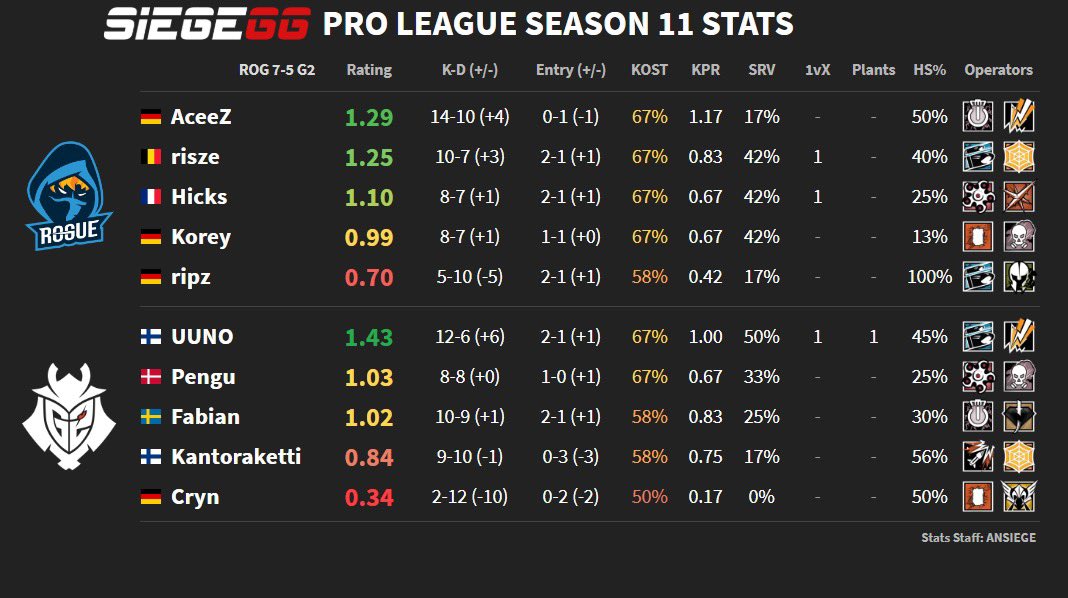 Across the rest of Europe, Vitality defeated ForZe 7-3, in a win that they hope will give them some momentum to hopefully begin a push to the top. Team Empire dismantled a struggling Na’Vi, 7-1. BDS also continued to apply pressure to the top 2 positions in Europe, with a 7-2 win against Chaos.

Over in North America, the best viewing was to be found in an unlikely game -- that between Team SoloMid (TSM) and Tempo Storm (TS) -- in what would become the narrowest victory for TSM so far this season.

Playing on Bank, the game had an explosive start as Pojoman was able to secure three kills on Server Stairs, and while Krazy answered back with three of his own, a lack of time meant Achieved would close out the final two kills with little issue. Two more rounds would go to TSM, with Tempo’s Dreams finding himself glitched in the wall for the second, but it seemed Creators would give Tempo their first round. Geo, though, would stand tall and deliver a 1v2 clutch, but Dream would finally help his team secure a round. Ignoring the interruption, TSM would continue its win streak, and close out the half 5-1 after a successful 1v1 by Beaulo.

A second round would finally come through for Tempo Storm on defense, but a Merc quadruple would make it seem like the match was all but over. Tempo’s players, though, were determined to make TSM sweat, as one round win became two, with Butterzz clutching out a tense 1v1 to deny Pojoman a 1v2. Tempo Storm would then begin knocking on the door of a draw with a Creators three-piece to make it 5-6, and it seemed TSM would let four match points slip. However, the league leaders would hang on after a successful defuser plant with all players still standing would almost go south, with Tempo mounting a successful retake except for Achieved above the site, and take the map 7-5. 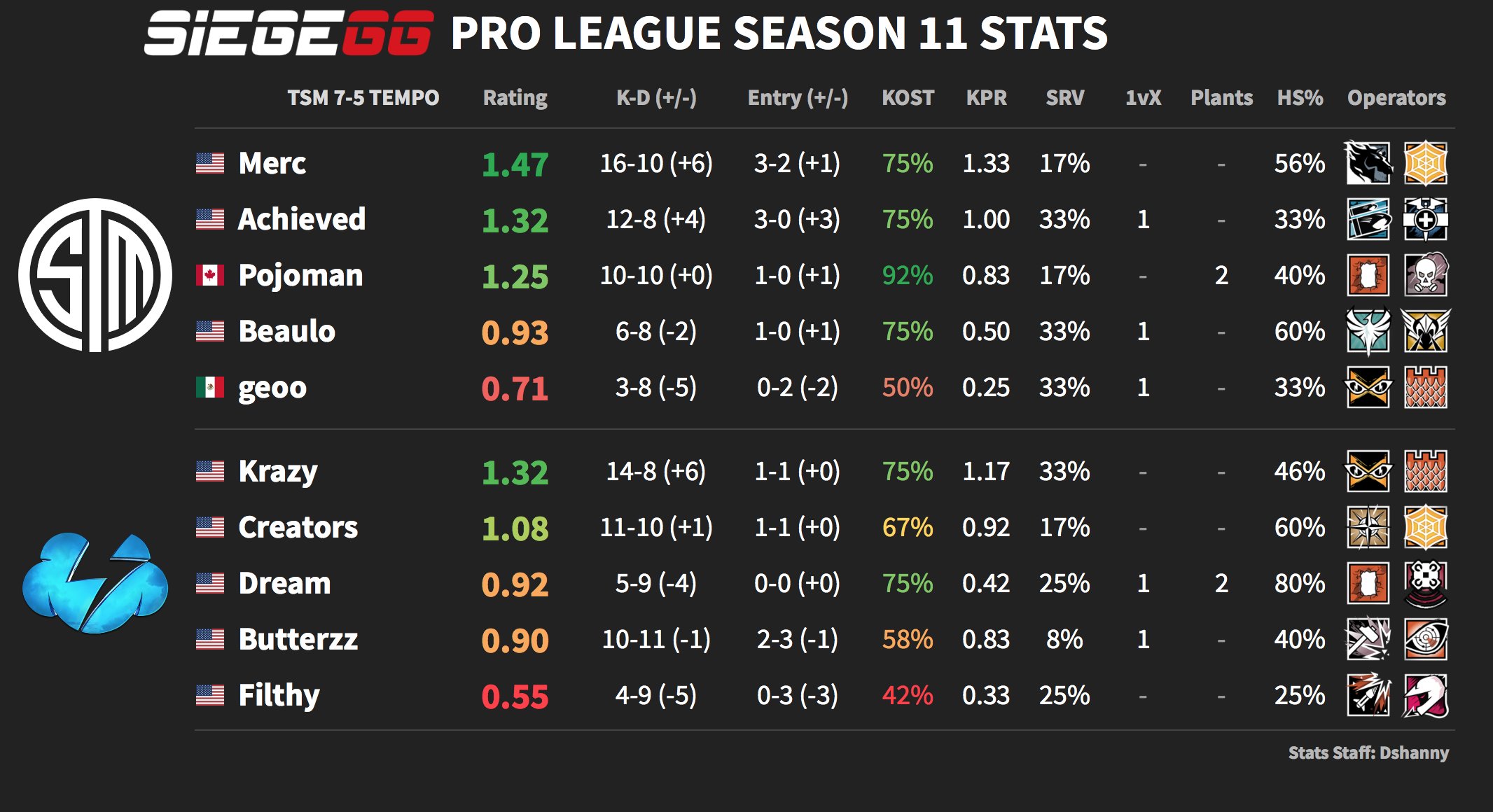 Elsewhere, Spacestation Gaming would be held to a draw by eUnited, DarkZero would crush Evil Geniuses 7-2, and Team Reciprocity would decimate Luminosity Gaming 7-1.

On the sixth day, there was a battle at the top of the standings between Spacestation Gaming and Team SoloMid. Prior to this matchup SSG were in third place with 10 points, and TSM were tied with DarkZero for first with 13 points.

The two teams would compete on Coastline, with SSG starting on attack. TSM started their defense strong on a traditionally attacker-sided map, winning the first round with a Sunrise and Blue Bar defense. TSM then continued to look strong with yet another defense win, securing a round win with a Kitchen and Service Entrance defense.

SSG would rebound however, waking up from a sluggish start to the match. The team won 4-straight attack rounds and finished the split in the lead, 4-2. Unfortunately, this would be the best SSG would look for the rest of the match. On the attack side, TSM won 5 consecutive rounds, and SSG failed to win a single defense. They simply were outplayed every round, and could not keep up with TSM’s firepower. 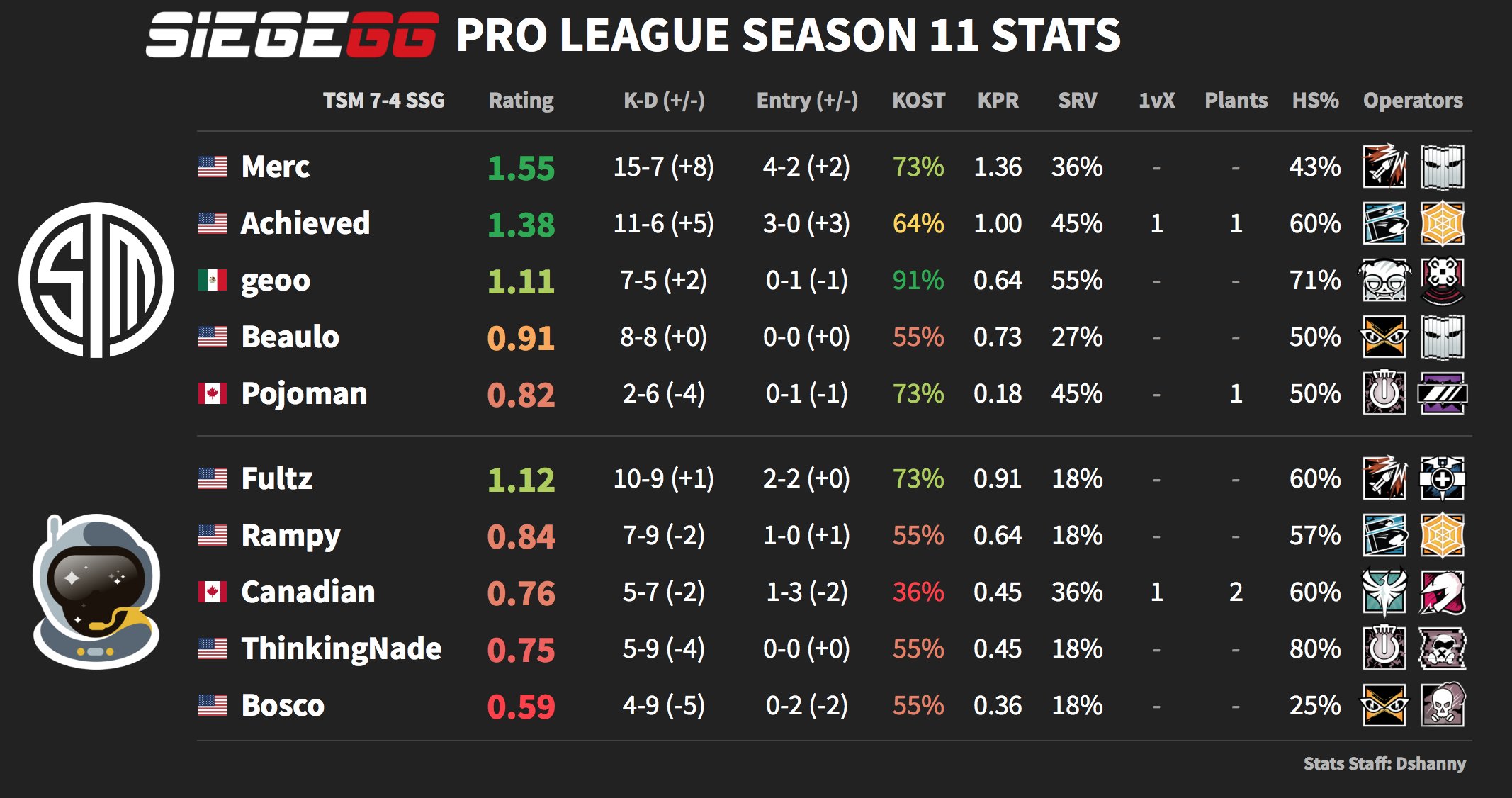 Through the rest of North America, dark conquered the light as DarkZero defeated Luminosity thoroughly, 7-1. Evil Geniuses drew eUnited, and a Tempo Storm player had internet troubles, causing them to forfeit against Team Reciprocity.

Over in Latin America, the best game to watch was undoubtedly the one between Ninjas in Pyjamas (NiP) and the up-and-coming INTZ e-Sports.

Playing on Clubhouse, INTZ got things started with a flawless defense of the Gym and Bedroom before a masterful play by Drunkzz would see him pull off a great escape to double the lead. Finally going to the basement, INTZ would make it three in a row but three kills for Muzi in the next round would finally win a round for NiP. Drunkzz would once again be the hero for his team, netting three kills to restore the three-round lead before a near-flawless round would make it four.

Up 5-1, NiP would take on the defensive role and freeze INTZ of the site to kick things off before Psycho and pino would ensure that the gap narrowed to two. In a 2v2, Drunkzz and Vnx would nearly win out an attack but once again be rebuffed, before NiP would equalise things with a fourth round in a row. A Montagne-led push from INTZ would then work a treat, giving the attackers match point, but NiP would earn the draw with a final, flawless defense. 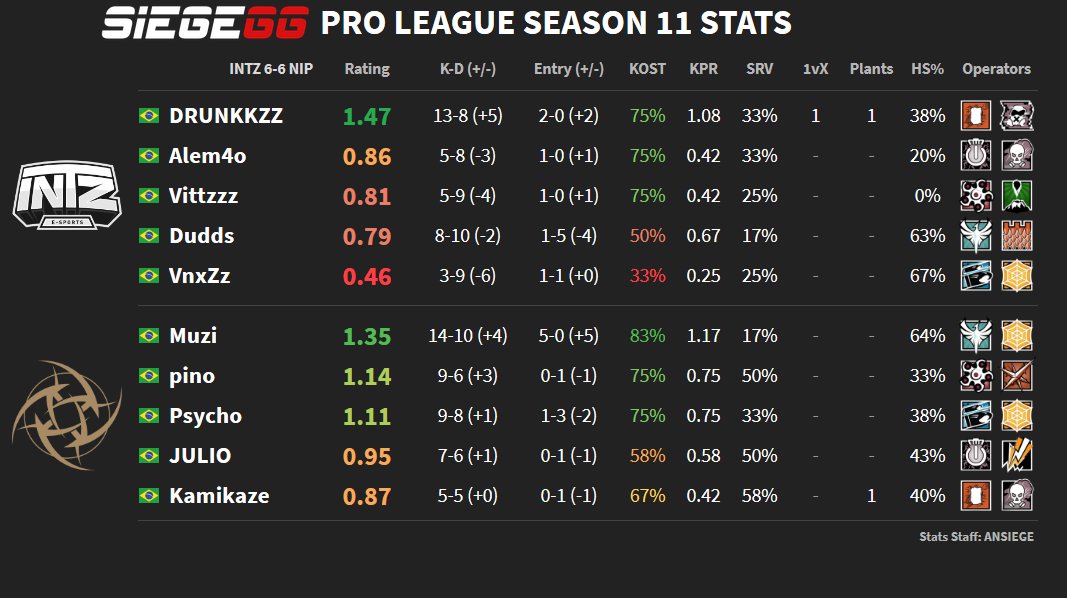 Elsewhere, Team Liquid would take down Black Dragons with an easy 7-3, FaZe would copy that scoreline against MIBR, and Elevate would surprise Team oNe with a 7-4 win.

In a “six point” matchup in Latin America, INTZ squared off against FaZe. Prior to this match, INTZ led FaZe in the region by one point, so the winner of this match would gain an edge in the battle for first.

Playing on Consulate, this match was a defensive affair, with a total of 9 defense wins and only 2 attack wins. INTZ set the tone with three straight defense wins, before FaZe took two attack rounds. INTZ would close out the split with a final defense win, making it 4-2.

Unfortunately for INTZ, that would be their last round win for the match. FaZe would cleanly win 5 straight defenses, to finish the match 7-4. It was a statement win for FaZe in the region, and INTZ need to continue to improve if they want to continue challenging the top position in LATAM as the season progresses. 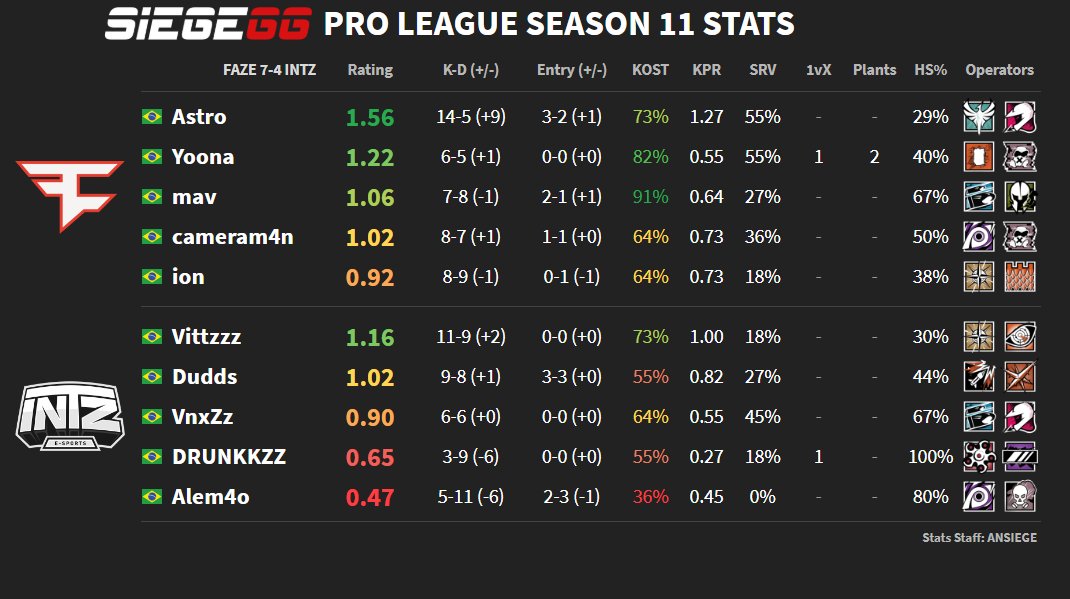 Across the rest of Latin America, Black Dragons defeated Team oNe 7-4, and NiP beat Team Liquid 7-4 as well. Elevate drew MIBR to finish up the matches in the region.

This upcoming playweek, we play our final set of domestic league matches before the Six Invitational! Be sure to watch G2 take on Team Empire, a matchup which will have both teams hoping to build momentum before the event.

In North America, DarkZero will be in a hotly contested match with TSM. Both are among the top teams in North America, and each one will want to gain a leg-up on their opponents domestically as well as a mental edge for the invitational.

And in Latin America, be sure to watch Team Liquid battle with rivals FaZe. Both are long-time members of Pro League in the region, with long histories of battles against one another in many tournaments.