SiegeGG will be partnering with esports betting site midnite.com -- here’s what that means moving forward.

SiegeGG is happy to announce that we’ll be partnering with midnite.com, allowing our fans to bet on the results of the Rainbow Six matches that they care about. We hope to provide users with the opportunity to put their knowledge to the test, to allow them to put their money where their mouth is, as is common in so many other sports and esports.

That said, at SiegeGG, we want to be as open as possible about our practices and partnerships, in order to allow our users and the community at large to understand our decisions and future pathways. As such, here’s a small explanation about our decision-making process.

How to Get Involved 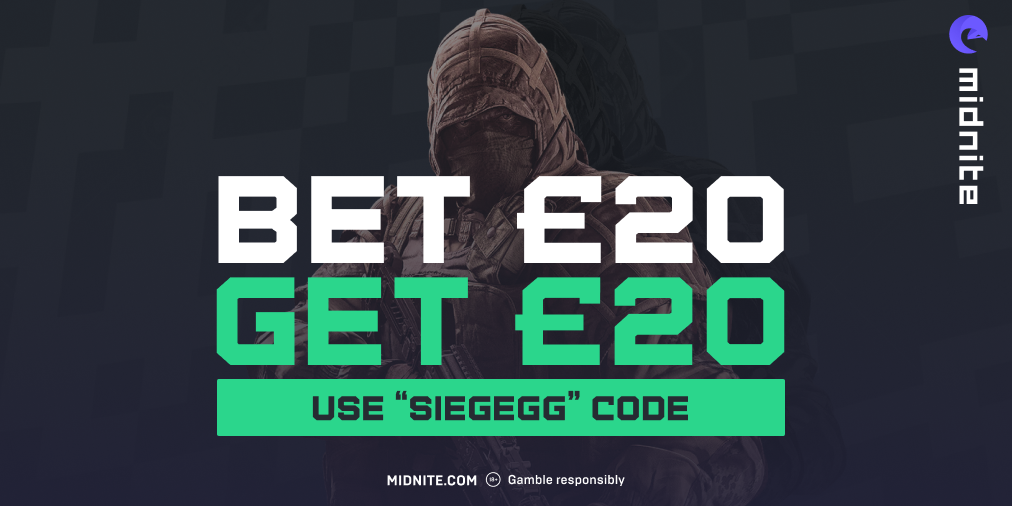 If you’d like to place a bet on a match, you can navigate to midnite's website via the link above. As the website is still in its pre-launch state, you will need to use our referral code "SiegeGG" in order to get access. If you don't use it, you'll be put on the waitlist and likely not get access.

After signing up with the code, you will have to check your inbox for an email with an invitation to finish creating your account, which will then give you access to the website. Currently, midnite is offering a special promotion to R6 fans where they will match your first £20 bet.

Since midnite abides by all national laws and regulations, there are many countries where betting is not currently allowed. Unfortunately for fans in prohibited countries, they will not be able to participate at this time. Midnite is expanding the countries that it operates in, and we will make announcements as new regions become enabled for betting.

We think that fans need to place bets in a safe and legal environment, free of predatory behaviors. These practices are too common in the betting industry -- especially in esports. When examining different outlets, ethical behavior was one of our priorities.

midnite is regulated by the UK Gambling Commission and is licensed in all countries where it operates. In order to use their site, you must prove your country of residence and that you are of legal age. We have ensured that there are no ways to circumvent these requirements and that anyone who is able to place a wager is in full compliance with laws and regulations in order to do so.

At SiegeGG, we want to remain as neutral as possible in our coverage of and reporting on the Rainbow Six competitive circuit. As such, all SiegeGG staff are prohibited from any personal involvement whatsoever with gambling on Siege matches or events. This is something we take very seriously, and will always be our policy.

The question of a possible conflict of interest would be catastrophic to our credibility. Even though our staff has no influence over match results we handle confidential and insider information that would likely result in the exploitation of the average consumer, akin to insider trading, an unethical practice in addition to being illegal in the United States. Any financial incentives on the outcomes of games by individuals would muddy the waters and compromise our ability to provide fair coverage of the circuit. This is not a legal restriction, but instead a moral decision made by SiegeGG ownership to remove any possible suspicion of foul play.

SiegeGG would also strongly recommend that players, coaches, casters, or any individuals with official involvement or close ties to insiders on the R6 competitive scene also refrain from placing any bets on matches or events regardless of their own involvement. It’s unethical as well as against competitive rules, and can result in long bans from competition.

As always, if there are any questions, feel free to reach out to us on Twitter and Discord where we will be happy to help. Until then, happy betting!