Catch up on what happened on the fifth day of the Raleigh Major with our quick summary as the all-EU semi-finals got underway.

With all other regions' teams eliminated, including the five North American teams playing on home soil, the stage was set for two all-EU semi-finals. Two Challenger League (CL) teams took on two Pro League teams, though Team Secret had dropped to the CL after a disastrous Pro League Season 9 campaign while forZe had yet to play a single CL game after having qualified just before the Major.

Their opponents were set to be incredibly tough nuts to crack, though, and the odds were stacked against Secret and forZe from the onset. Team Empire were the reigning Pro League champions, while G2 Esports were the reigning world champions, and both were looking for another title.

Missed the action, though? Fret not, and read on for a brief summary of all the action seen during the semi-finals of the fifth-ever Rainbow Six Major, held at the Raleigh Convention Centre in North Carolina. 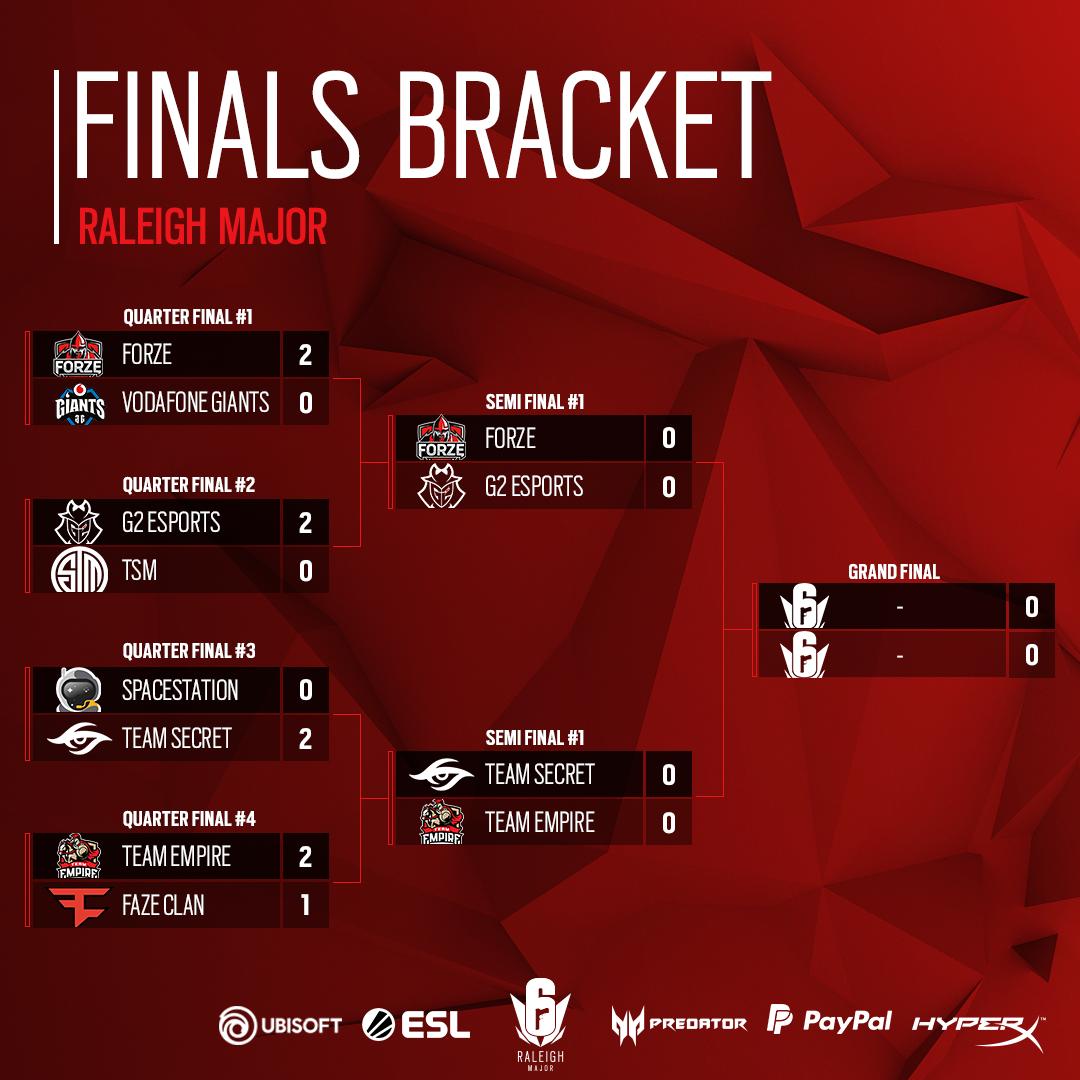 The first of two all-EU semi-finals at the Six Major Raleigh started off with Team Secret inviting Team Empire to Bank, and it seemed right off the bat that it had been a poor decision. In the very first round, a poor drone game from Secret meant that JoyStiCK would collect an easy three-piece, before Scyther would become the star of the show -- first with a double-kill on the flank and then with an incredibly well-played 1v2 clutch. Down 0-3, Secret would then finally wake up and put a flawless round on the board and follow that up with two more round wins, helped along with a LeonGids triple-kill to tie things up heading into the second half.

Swapping over to attack, with both teams having had put three rounds up in a row each, Secret smelled blood in the water, especially after FaZe Clan’s drubbing of Empire yesterday on their best map of Clubhouse. An aggressive defense was what greeted Empire right off the bat, and as each kill was traded off immediately by both teams, meepeY was eventually left alone to be the hero in a 1v2 to give Secret their first lead. Empire, though, had seemingly just been recalibrating on attack and came back with a vengeance, with karzheka and Dan both securing three kills each in successive rounds. It was all Empire from then on out, as they snuffed the life out of Secret and took their map pick 7-4.

Over on Coastline, though, it was meepeY to strike the first blow as he was immediately the saviour for Secret with a masterfully played 1v3 clutch with Smoke’s SMG-11. With Empire in control of the very next round, it seemed that meepeY would once again make a 1v3 happen, but karzheka’s overwatch ensured that Empire would equalise the round count. A near-flawless round from Empire and two three-pieces from Dan (and one from Fonkers) later would mean that the half would see Empire with a 4-2 lead.

Secret, though, seemed thoroughly unfazed. Now on the arguably stronger attack, Ferral would start things with a 3k before LeonGids would get two double-kills in consecutive rounds as Secret would swarm Empire before the Russians could re-frag or realise what was going on. Ferral would then come up big once again with a 4k this time, with Secret suddenly fearsome on opening kills, leading Empire 7-3 in that statistic. Now on match point, Fonkers would then join in the party with a three-piece but be answered by ShepparD with a 3k of his own. Secret, though, would stave off overtime with a combined effort and dismantle Empire’s final defense to move onto Border.

The multi-kill party would continue on Border, with JoyStiCK kicking things off with a quickfire triple while rappelling, but Ferral and LeonGids would then get three of their own in consecutive rounds to wrest the early lead away from Empire. With Border one of Empire’s best maps, though, it never looked easy for Secret as two strongly played attacking takes from Empire -- one featuring another 3k from JoyStiCK -- would mean that they would once again go into the second half of the map with a 4-2 lead.

Secret would then show signs of repeating their Coastline performance, as LeonGids would get a triple-kill and Elemzje would cap off the first round after the swap with two of his own, but that would be all else the UK-majority team would get from the map. With 21 of the 30 rounds so far featuring a 3k or more, some semblance of normalcy was restored as the game mellowed out with fewer solo-plays. However, Empire on defense seemed even more self-assured as they consistently put up brick walls in front of Secret, taking three rounds in a row to get to their third international LAN Grand Final in a row -- a feat previously only achieved by G2 Esports.

While the match was never going to be easy for forZe, not many would have expected such a clinical exhibition of Rainbow Six: Siege from G2 Esports. With forZe allowing Coastline and Clubhouse through, G2 were more than happy to show forZe just what the difference is between the reigning world champions and merely ‘normal’ Pro League teams. With the first two rounds going solidly in favour of G2, forZe fired back with one but immediately took a tactical timeout to try and stem any further bleeding.

The timeout was for nought, however, as G2 went on a three-round rampage, clearing out roamers quickly and collapsing onto site with no mercy as they went up 5-1 in the first half. Immediately after, though, Rask led the charge with a 3k as the Russians piled into site, but G2’s adjustment afterwards was inch-perfect. Retorting with a strong defensive hold, G2 then eliminated all but one member of forZe, and despite wTg’s best efforts with a three-piece, forZe slumped to a 2-7 defeat on Coastline.

Moving onto Clubhouse, G2 Esports were well and truly in control. In the very first round, KaMa shot his own Thermite charge, but Shockwave was determined to make the second map a closer contest, almost securing the ensuing 1v4. A Bar/Stock defense from G2 meant that forZe would tie things up, however, and the Russians would pile on to take the lead off the backs of tightly played trades and a p4sh4 double-kill to take the lead for the first time. That was all G2 would concede to their opponents, however, as G2 Esports held on amidst a technical triple-kill from p4sh4 that unfortunately included his own teammate, before UUNO became the star of the show.

Punishing forZe for not being able to Maverick trick, he started with a relatively tame Kaid trick of his own, followed by a 3k with Pulse that was helped along by a C4 double-kill. Up 4-2, G2 Esports would take a tactical timeout -- presumably to be reminded not to show their hand in anticipation of the Grand Final tomorrow -- before UUNO would get two more with a frag-grenade, now on attack. G2 would then pull apart forZe’s defense with ease before putting Russians out of their misery with a seemingly effortless take, granting Team Empire’s wish for a rematch of the Six Invitational 2019 Grand Final where G2 had run out 3-0 winners.

Catch all of day six’s Six Major Raleigh action tomorrow on the Rainbow6 channel as Team Empire and G2 Esports duke it out on the final day of the event in a repeat of the Six Invitational 2019 Grand Final, with both teams determined to become the Summer Major champions.