Catch up on all the action from the Six Major Raleigh APAC Qualifier LAN in Sydney, where each APAC subregion sent a team to vie for the coveted third APAC spot in the upcoming Major.

Four teams, three games, and one winner. Such was the equation at the Six Major Raleigh APAC Qualifier LAN, where each subregion in APAC -- ANZ (Australia and New Zealand), Japan, Korea, and Southeast Asia (SEA) -- had one team representing them in an effort to become the third APAC team at the Major. Playing in a single-elimination, Best-of-Three format, there would be no room for errors. 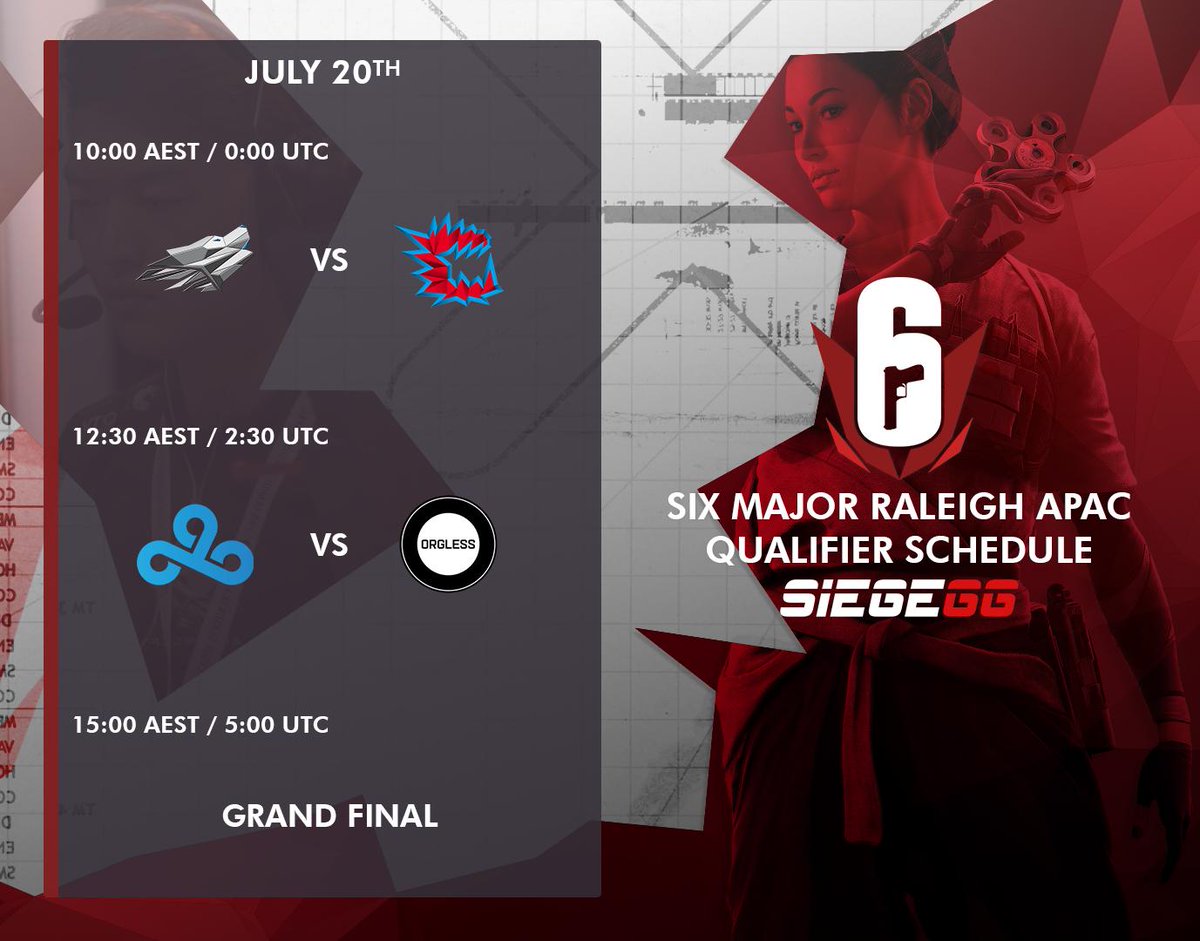 With Kafe the pick from Cyclops Athlete Gaming (CAG), and featuring one of the players that had dealt Aerowolf a particularly bitter Season 6 defeat, the Southeast Asians would have been forgiven for feeling a sense of deja vu. However, despite their history and CAG’s strength on Kafe, Aerowolf would likely have been happy with the Bank and Coastline picks -- both maps being two that they were strong on. Unfortunately for them, things would not play out in their favour.

As the game got underway, it seemed that the curse of losing the map and the series by a razor-thin margin would not even rear its head as CAG took an early and -- save for a first round 1v1 -- seemingly effortless 3-0 lead on defense. The Japanese penchant for spectacular individual plays was well and present yet again, and their confidence was palpable. However, Aerowolf collected themselves and pulled things back round after round, eventually tying the half 3-3.

A head-scratching Tachanka pick from Shohma “Shokei” Shiotsuka then took two frag grenades, an asphyxiation bolt, and over half the round to disable and give Aerowolf their first lead, but CAG got serious once more and took three additional rounds on the trot. Facing two match points, Aerowolf recovered one and were set to lose the next, down two men early. Put in a 1v3 in the dying seconds, and needing to win to force overtime, Patrick “MentalistC” Fan secured two kills but was paralysed with indecision against the remaining Echo, and Aerowolf lost the round and the map by a mere few seconds.

Starting off well enough, playing a game of attrition and then defaulting back to site to take up the standard defensible positions, CAG secured the first round. Aerowolf immediately fired back, but as it had been shown on Kafe, the Japanese were unfazed. They pulled two rounds into the lead, and looked good value for it, but Aerowolf themselves refused to be cowed and regained lost ground to go into the second half level on rounds.

A near-win and first lead for Aerowolf was then thwarted when the team’s commonly played Clash strategy was dealt with in the dying seconds by Hideki “gatorada” Nishida, but CAG then lost the lead for only the second time this series after an asphyxiation bolt misplay allowed Aerowolf to deny the plant and execute the retake with a man advantage. Unfortunately for them, CAG would once again take the lead and put themselves up on series point. With the seconds ticking down, Jeremy “HysteRiX” Tan would keep his nerve to win out a 1v2 and force overtime.

In overtime, Aerowolf began by attacking first, and secured a lead thanks to some uncharacteristic individual mistakes from CAG’s players, but the Japanese would respond in kind, getting a strong man advantage in the first minute via a bloodbath that eliminated three Aerowolf players to one of their own. Taking their time to drone, CAG then effortlessly took down the frazzled defenders. Now on the final round, Aerowolf were ready to execute onto the bomb site with ample time and a man advantage, but a server crash forced a rehost. CAG then took the time to compose themselves and came back a lot stronger, repelling the attack and taking the series 2-0.

With Bank the first map to be played, an 0RGL3SS staple, the Australian squad would have been feeling confident to start off. Going over to Kafe after, viewers were left guessing as to how each team would perform on Kafe, given that 0RGL3SS had yet to play it outside of scrims and Cloud9 had not faced as strong an opposition as 0RGL3SS despite having played Kafe twice in the online qualifiers.

As expected, 0RGL3SS started off strong on their own map pick of Bank, taking an attack onto the basement with little difficulty, and repeated the feat again the next round -- though they needed a ballsy play from Brandan “Derpeh” Carr to do so. Third time was the charm for Cloud9, though, as they finally won the basement defense and then won the next round too to tie things 2-2. It then seemed that 0RGL3SS would retake the lead, but an impeccable 2v5 rescue job from Cloud9 saw 0RGL3SS forced to come from behind to equalise things at 3-3 later.

At the role swap, though, 0RGL3SS started pulling away, piling on round after round and making Cloud9 look surprisingly disorganised to eventually be poised to take the map with three match points in hand. The Koreans, though, chose this moment, with their backs against the wall, to come back to life. It was 0RGL3SS that seemed lost now, conceding round after round despite valiant efforts from their players and were unable to stave off overtime.

In overtime, though, 0RGL3SS would once again gain the upper hand with a strong basement defense, but things were far from decided as Cloud9 forced them to go the full distance after starving them of time the very next round. One round away from winning or losing the map, 0RGL3SS would hold firm to repel the Korean attack and secure a strong foothold by winning their map pick.

Now on Cloud9’s map pick of Kafe, most expected the comeback from the Koreans to be on. However, it was 0RGL3SS that drew first blood with a strong defence and it was clear that this would be no cakewalk for Cloud9. The Koreans came back strong, though, winning two rounds of their own, but the race was then on. 0RGL3SS then took the lead but, as expected, Cloud9 pegged them right back.

Going into the second half on level rounds, the pattern did not let up. A stunningly executed third floor defense saw Cloud9 win a convincing flawless round to regain the lead. Back and forth went the two teams yet again, though, and 0RGL3SS were left with the challenge of winning three rounds on the trot on attack. The Aussies, though, had come to win, and they took one round to equalise the round count before pulling off two flawless rounds, thus winning their first ever APAC LAN match and keeping them in the hunt to qualify for their first-ever Major.

With a new APAC team guaranteed to feature at an international LAN event, this match was expected to bring the fireworks -- and it certainly did. With the map veto phase not giving either team a distinct advantage, not many knew what to expect except a great match.

Finally heading to a new map for the day, Coastline started off with first blood going to the Japanese squad. 0RGL3SS retorted with a round of their own, though, punishing the aggression from CAG but were then faced with even more aggression that saw them lose two further rounds. Taking a tactical pause, coach Vinnie “syliX” Tam helped his team catch their collective breaths, and 0RGL3SS came back strong to tie the half 3-3, assisted with a strong Montagne-based push.

The charge continued on as the roles were swapped around as they won a convincing defense before having Kyle “Diesel” Renton and Tien “EmoRin” Lam pull off an amazingly played 2v4, with the latter securing three in the round for himself. CAG pulled things back with one round recovered, though, and it seemed that they were ready to repeat their earlier performance against Aerowolf, but the Australians stood tall and shut the Japanese down to put themselves one map away from the Major.

Once again, this time in a do-or-die map for CAG, it was the Japanese who took the first round. They came up big immediately after as well, denying the plant in a frantic round that had all ten members left alive in the final fifteen seconds. This time, though, while 0RGL3SS clawed one round back, it seemed that they had poked the bear. CAG punished their opponents’ lack of good time management again and again, winning round after round with no answer, and managed to perch themselves at 5-1 going into the second half.

A strong defense from 0RGL3SS on the basement gave their team home, but a massive 1v2 clutch from gatorada in a tense situation give CAG four match points -- one round away from pushing proceedings to Villa. A runout from EmoRin then started his team on the long road of recovery, and for a while it seemed that overtime was on the cards, but 0RGL3SS were unable to keep the streak going on the first floor and were forced to go to the decider map.

For the first time in this series, 0RGL3SS were the ones winning the first round, shifting Ethan “Ethan” Picard onto the Montage. On attack, the odds would have always been stacked against them but despite losing the Montagne to an over-aggressive push into the site, 0RGL3SS managed an early two-round lead. However, the decision to consistently force Ethan onto the Montagne again and again despite a failure to make that strategy work proved to be a key reason why CAG came back with a vengeance, taking the split 4-2.

Nevertheless, with Villa being a defender-sided map, 0RGL3SS still stood a good chance at the win, but the Japanese were more than ready. Taking the first round after the role swap after some excellent play from gatorada, it was clear that their Montagne play was far superior than from 0RGL3SS. Despite losing a round after failing to clear a rampaging Ethan on the first floor, CAG soon had the luxury of three match points. An attempt at not bringing the Montagne was thwarted by 0RGL3SS, giving them and their fans hope, but an eleventh-round pick onto Montagne again was instrumental in CAG securing the round and the series, thus booking their tickets to the Six Major Raleigh.

With the Six Major Raleigh APAC Qualifier LAN now over, and the EU qualifiers also settled, all that remain are the LATAM and NA qualifiers to be played in mere hours, before the fifteen qualifying teams are decided and a host country invitee is chosen. Catch these games in action later on the Rainbow6 Twitch channel, and tune in for the Six Major Raleigh from the 12th to the 18th of August to see Cyclops Athlete Gaming in action at their first-ever international LAN event.