With Season 10 of the Pro League underway in APAC, SiegeGG has a look at what happened in the week prior and what to expect in the upcoming week.

With the Pro League and other competitions underway in APAC, it certainly is an exciting time to be part of the competitive Rainbow Six scene in the region. With the Pro League now on hiatus until mid-September (except for a reschedule Japanese game), read on to find out what happened in the past week and what is in store for the region this week from the 17th of July.

In ANZ, Team SiNister’s Pro League struggles did not let up, as they only managed to secure one point over Power Plays, after which Oddity Esports were fairly convincing in their 2-0 victory over Zealous. The next day, 0RGL3SS brushed off the challenge of Mindfreak as had been expected, but the best viewing was undoubtedly to be found on the last ANZ game before the break.

In a highly surprising result, with some attributing it to Fnatic’s desire to save strategies for the Six Major Raleigh, Fnatic dropped the first map 7-5 to FURY, and nearly lost the second as well, eventually squeaking through to win 7-5 this time. Excluding the old playoff format, this marks Fnatic’s first loss in the online Pro League since Season 8, when they had lost to DedSet (now SiNister). 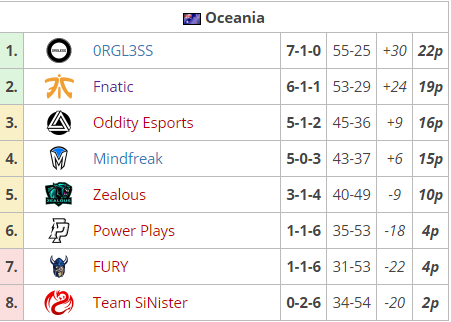 These results mean that 0RGL3SS take top spot in the league headed into the break, with Fnatic hot on their heels. Oddity and Mindfreak are not too far behind, but it will undoubtedly be a challenge for either to displace the top two to make it to the APAC Finals.

Over in the Six Masters, where the group stage will take a one-week break before its final week to allow for the Raleigh Major APAC Qualifier LAN, the biggest upset to be found was in the first game of the week. In stunning fashion, overturning their poor run of form in the Pro League, Team SiNister took down Oddity 2-0 (7-3, 7-5), almost certainly pushing them out of LAN contention and firming up their own appearance there.

0RGL3SS then took down their opponents, ACME Association, 2-0 without much of a fight, as did FURY against Extricity. Rhythm beat Sleeper Gaming 2-0 as well, and Extricity lost their second game of the day when Mindfreak also beat them 2-0, leaving them winless and needing to beat both Rhythm and Sleeper to qualify to LAN. With Rhythm and Sleeper both tied at 3 points and playing Extricity next week, they will be hoping that they win against Extricity themselves, and have Extricity beat the other team.

Over in Japan, Lamy Wonderland started the week by securing their first win of the season over Unsold Stuff Gaming, before their opponents fired back on the second map to get their own first win -- and points -- of the season. In a surprising result after, FAV Gaming then drew one map against DetonatioN Gaming before comfortably beating them on the second.

On the second day, Father’s Back’s struggles continued as they capitulated to Cyclops Athlete Gaming (CAG), still hunting for their first point of the season. NORA-Rengo, too, were hit with another shock, this time drawing one map against GUTS Gaming before taking them down on the second. 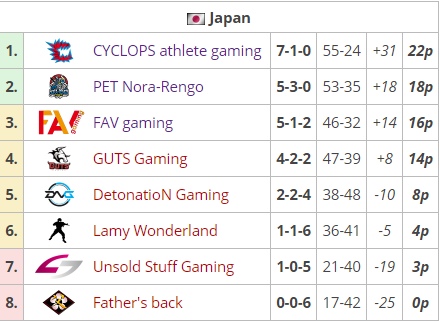 These results mean that the league is finally having the leaders establish a cushion, with CAG yet to lose at the top, and with NORA-Rengo, FAV, and GUTS all in contention for that second APAC Finals spot.

However, Father’s Back may yet get their first point(s) of the season as they play their game against Unsold Stuff Gaming later tonight after it was rescheduled thanks to the former’s participation at DreamHack Valencia.

Catch all the Pro League action from 7 PM JST (GMT+9) on the Rainbow6JP Twitch channel (in Japanese), with VODs of previous games also available there.

Over in Korea, TRIPPY took home a massive 7-3, 7-4 victory over SCARZ -- the Season 9 APAC Finals participants (then Ageless) -- in what should almost certainly secure their own APAC Finals appearance. Barring a larger 0-2 loss to SCARZ on the final play day in September, TRIPPY are all but confirmed at the APAC Finals.

As expected, this means that Korea sees Cloud9 reign supreme with a flawless record, and TRIPPY joins them to provisionally be the second team headed to the APAC Finals.

The second weekly saw TRIPPY win, this time against HyperSpace, while UnKnown came third again after SCARZ seemingly forfeited their third-place playoff. Team uR, this time around, had been knocked out by HyperSpace in the Quarter-Finals.

Find all the Pro League and Korea Cup VODs on the Rainbow6KR Twitch channel (in Korean), with other games also streamed to the same channel.

Rounding things out was Southeast Asia, where NEX Esports comfortably dispatched MBT Impetus across their two maps, though Lese Esports conceded an unfortunate draw on the second map after having crushed Venberg Esport -- now picked up by Luminescent -- on the first map.

However, the pick of the action was certainly to be found on the second day, as the grudge match between Scrypt E-Sports and Aerowolf saw the latter solidify their push towards an APAC Finals appearance, winning the first map, but drawing the second. Xavier Esports then took down Team Void with little difficulty, keeping their undefeated streak alive. 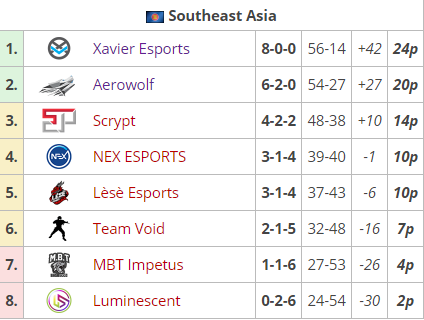 As such, Xavier Esports sits pretty on top, with Aerowolf right behind the Thai team. Scrypt may be able to launch a challenge against Aerowolf, but being down in head-to-head means it is highly unlikely that we get an explosive finish to the season like we did in Season 9.

Find the previous Pro League action on the Rainbow6SEA Twitch channel, with the first five play days having been on the R6_SEA community channel.