Catch up on what happened during the European Pro League Play Day #13.

To kick off the playday, a great matchup between Chaos and Millenium provided the ideal atmosphere for the remaining games to come. Millenium started off strong with the first two rounds to their name, but at the end of the first half Chaos came back on top with a 3-2 lead. Round 8 would put the match point in favor of Millenium, but the match advanced to round 10, where Millenium locked in the win. AceeZ’s 1.52 rating, 2.8 K/D, and 1 KOST makes him the standout player of this game. Now with the three points to place themselves above Team Secret, they are tied second place with Mock-It. If Millenium manages to win against Mock-It next week, they’ll punch their ticket to Rio.

A shock loss for G2 brought the players on their former organization, PENTA Sports, a victory in the second match of this EU Playday. Considering G2 had already secured first place in the EU standings, this was definitely an affordable loss for G2. In a back-and-forth matchup, PENTA’s 5-4 lead heading into the final round seemed strong for G2 to force a tie, but Panix managed to grab an incredible 3k to close out the round in favor of PENTA, giving G2 their first loss this season. Revan and Pengu would be the star players of this matchup, with 1.57 and 1.53 ratings, respectively.

Barrelling off of the monumental 6-4 PENTA victory and previous news of Vitality’s own BiBoo stepping down from the active roster, Supremacy captured their very first win this season after a 6-4 victory against Vitality on Bank. Heading into round 9, Supremacy had shifted the game into their favor with a 5-3 match point lead, forcing Vitality to step up their game and leading BriD and Rafale to grasp round 9. However, round 10 would prove to be Supremacy’s stake to their claim. Spark’s 1.44 rating puts him far above the statistics of any member on Supremacy, but both teams are fated to stay locked in the bottom of EU standings.

In what has been universally considered the most nail-biting match of European Pro League this season, the teams of Mock-It and Team Secret fought valiantly for the spot at Rio. Mock-It had match point locked-in after a nail biting 1v1 between BakaBryan and Meepey on round 8, but Team Secret climbed back up tooth and nail to secure the draw and one point for both teams. Korey, Meepey, and Elemzje stand out on the leaderboards with 35 kills between the three of them. Now with Mock-It and Millenium facing each other next week, either team can catch the win to head to Rio, or, if the result is a tie, Secret must win their match against Chaos to advance to LAN.

These are the standings in Europe after 13 playdays: 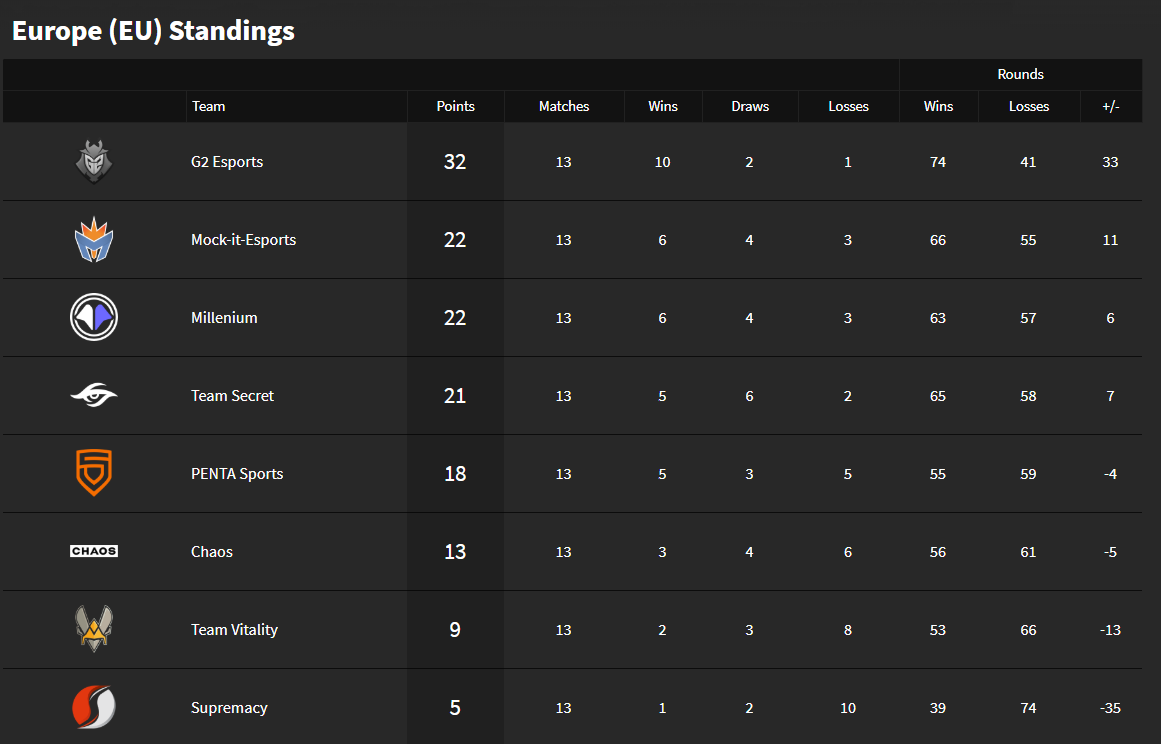 Be sure to catch the final day of European Pro League on the official Twitch and YouTube channels on Thursday, October 25th at 1 pm EDT/7 pm CEST/2 pm BRT. To see all the upcoming games schedules, go to our Matches page, and check out completed games stats by clicking on the individual games.