Here's a quick summary of all the changes in the EU League and EU Challenger League since the end of Stage 2.

As SiegeGG's hub for all roster changes in the transfer window post-Stage 2,  this page will be regularly updated with the latest transfer news. Check out the LATAM, NA, and APAC threads for changes within those regions as well. 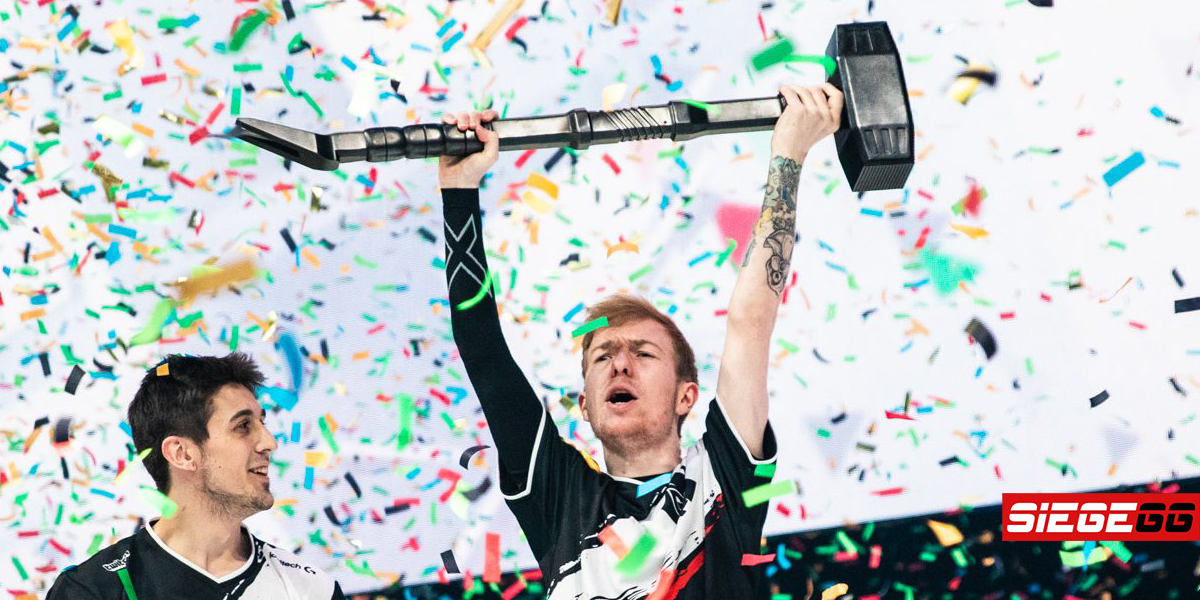 After five years at the top level of Rainbow Six: Siege, G2 Esports player Niclas "Pengu" Mouritzen announced his retirement from the competitive aspect of the game today. The move comes after he spent all five years competing at the top-flight and on the same roster.

After announcing they were to cut the analyst role in their R6 team last November, G2 has done exactly that leaving Kevin "Sua" Stahnke to leave the team. Read more about this change here.

V.p's Kazakhstani coach of Kerim "Toda" Musaev has left the team following third-place finishes during both the August and November regional Majors as well as the EUL Finals.

The ex-Pro League and Six Invitational champion of Ville "SHA77E" Palola has left Team Secret after joining the team ahead of Stage 2.

SHA77E previously spent time on both GiFu and PENTA where he won international titles on both before joining Chaos for Pro League Season 11 and Stage 1 of 2020 and then Team Secret for the second half of the 2020 Season.

While on Secret he helped the team climb from a ninth-place finish in Stage 1 to sixth in Stage 2 as they escaped the relegation zone:

After eight months coaching Rogue, Wille "r0usty " Turunen has left the team ahead of the 2021 season. After previously working alongside the British majority lineup of Team Secret in the Challenger League, r0usty joined Rogue at the beginning of the 2020 Season last June as a Performance Coach.

Since then he has helped the team to win Stage 1 of the European League and qualify for the August Regional Major as well as finish as runners-up in the GSA National tournament behind just G2 Esports. Most recently, after a disappointing Stage 2 performance, the team took down MnM Gaming 3-1 in their relegation game to book a spot in the 2021 Season.

r0usty now leaves this role with his future plans to be announced soon.

Natus Vincere (Na'Vi) has benched its captain of Luke "Kendrew" Kendrew following the postponement of the Six Invitational 2021.

In the 2020 season, Kendrew had led Na'Vi to fourth place at the European League Finals, as well as the grand final of the Six Invitational 2021 EU Qualifiers. Most notably, however, Kendrew had been part of the Na'Vi roster that had been victorious in its debut Pro League season at the Season 10 Finals in Tokoname.

In his Twitlonger, Kendrew spoke to troubles that had plagued the Na'Vi roster following its Season 10 victory. "For a while now we struggled with consistency in form and every other change we made; whether it was more firepower or more structure, it didn't work," he said.

However, despite his time with Na'Vi coming to an end, Kendrew revealed that he will be playing in the European League (EUL) for the 2021 season with a new team, with an annoucement due "very soon".

Na'Vi, meanwhile, will be looking for a fifth member, with some fans hoping for the return of the team's former In-Game Leader (IGL) Leon "neLo" Pesić since he was benched in August last year and became a free agent in September.

The British in-game-leader of Team Secret, Peter "pacbull" Bull, has exited the team after joining Secret half way through the 2020 season.

Pacbull previously played on a number of national teams including MnM and DIVIZON before joining the struggling Secret lineup in September as the second non-German on the team after SHA77E. Pacbull helped the team climb from a ninth-place finish in Stage 1 to an eventual sixth-place finish in Stage 2 putting them well clear of the relegation zone. Following this, Secret fell to Tempra in the SI Qualifier semi-finals to end their 2020 Season.

Pacbull's future and his replacement on Secret is currently unknown as the team has over a month to find a replacement.

The ex-PENTA roster which had competed in the Pro League since Season 8 has been acquired by the RAMS organisation ahead of the 2021 Season.

After being relegated from the Pro League in Season 10, PENTA then fell in third place for the last two Challenger League seasons just missing out on promotion spots. Following the most recent loss, PENTA dropped the lineup and leading to them now joining the RAMS organisation which currently also holds teams in Call of Duty, Fortnite, FIFA, and Team Fight Tactics.

As well as this org pickup, the roster also saw both Alive and BlaZ -- the two worst performers during the Challenger League Playoffs for PENTA -- be replaced on the team by two players for the CCS Season 5 team of Sleepy Gang of EiZ and Meloo, the latter of which finished as the second top performer in the season behind just BlaZ himself.

This team will now aim to regain their Challenger League spot for 2021 through the upcoming 6 French League tournament in which the ex-Tempra roster looks to be their main competition.

The Italian organisation of Tempra Esports has decided to not renew the contracts of all five-player, their coach, analyst, and manager.

This comes after the roster won Season 11 of the Challenger League to qualify for the EU League, only to finish their debut season in sixth place; just a single point from the EU Finals. As well as this, the team finished second during the Six Invitational qualifiers, losing to Mkers in the grand-final.

Now, all five players of P4, Shiinka, Chaoxys, Dirza, and Voy as well as their coach of SpokeN, analyst of MrBox, and manager of TORTANK have been dropped from the organisation a few weeks after the organisation's R6Share skin released.

The organisation will now be looking for a new lineup for the 2021 season, with the Mkers lineup rumoured. However, with the rule that at least two players need to be from "the same level of competition the team was at during the previous season", which could indicate either the EUL as expected, or the 6 French League and/or the Challenger League.

After a truly stellar performance during the Russian Major League Finals on DED Inside, the ex-Virtus.pro player of Pavel "Amision" Chebatkov has joined Russia's Challenger League representatives of Winstrike to replace Stanislav "Leri" Akimov.

Leri had been with this team from the beginning, helping them to third and fourth-place finishes in the domestic RML tournament as well as a quarter-final finish during the EUCL Playoffs. Amision, meanwhile, competed on V.p during Season 11, Stage 1 of 2020, and the August Major finishing in fifth, fourth, and third, at which point he was replaced on the team by Andrey "m1loN" Mironov.

Following this, he achieved a 1.76 during the RML Finals while on DED Inside against his old team of V.p and his new team of Winstrike proving his ability and leading to this change.

Everything was quite ordinary. After an unsuccessful performance in the Challenger League playoffs not everyone felt comfortable to play, so we started to think about a replacement.

At the end of the RML Finals, the transfer window opened and we started testing the players. Amision showed the best results, so the choice was obvious. Leri is a great player, one of the best shooters I have seen, but this change was necessary for us. I can only wish him good luck and hope that he will find a team to continue his journey with.

After a four-year career, the Swede of Mattias Johannes "Renuilz" Nordebäck has called time on his competitive Rainbow Six career.

Renuilz had first begun playing prior to the inaugural Six Invitational in February 2017, having debuted professionally on Euronics Gaming. While Euronics had lost its match to Santos Dexterity, Renuilz had moved onto the Playing Ducks roster, spending just under a year there -- across the names of sn0oken Knows and i don't know as well -- before an acrimonious split with the British core of the team.

Then forming The Swedes, Renuilz had stayed on this roster into its transformation into the Chaos Esports we know today up until its relegation from the European League last month.

With Chaos already auto-relegated, the change will not be that impactful, except it does put a dent in the team's potential plans to play in the upcoming Six Invitational 2021 Open Qualifiers.

The Chaos Esports Club organisation, after its relegation from the European League (EUL), has expressed its committment to finding its roster a new organisation. This move comes primarily due to the financial hits the organisation has taken due to the COVID-19 pandemic, rather than the relegation outright.

Earlier, in October, former analyst Jack "Fresh" Thomas Allen had announced his retirement from the game after he had been unable to prevent his team from being automatically relegated from the EUL for the 2021 season.

This had been despite Chaos swapping Ville "Shatte" Palola and Rasmus "REDGROOVE" Larsson for Arif "Next1" Keskin and Rickard "Secretly" Olofsson between Stages 1 and 2, a move that actually netted the team three wins in Stage 2 -- up from none in the first stage.

While Chaos solidifed itself as the top Nordic team in 2020, eventually winning the national-level Nordic Championship, it had significant issues in the top-flight. After winning no games in the first stage and drawing five, the demand of a total of five wins in Stage 2 to avoid auto-relegation had proven too much for the Swedes.

For Next1, the move could not come at a worse time, with his father diagnosed with COVID-19 earlier today. With Chaos badly hit by the pandemic, it is unclear how their salary payouts will now be processed, but promises to find the Rainbow Six roster will be greatly welcome in a highly competitive second-tier European stage.

Aside from Rainbow Six, Chaos has also released its Counter-Strike: Global Offensive (CS: GO) roster, with a "shift to focus on supporting more content creators both in and outside of gaming" to be the new vision for the organisation overall.

And so, that's every change within the European region so far in this transfer period. Check back here for more updates over the coming days!