With the Pro League well back in action for Season 11 in APAC, and games spread all across the four subregions, there was much anticipation in the second week. Giants Gaming featured in the first match in Southeast Asia, Cloud9 seemed continue on a downward tumble, while Wildcard Gaming and NORA-Rengo continued to struggle. Read on to find out what happened.

The most competitive subregion in APAC continued to live up to its name with the very first match of the week. Kanga Esports, having drawn against Fnatic in its own opening game, went up against Wildcard Gaming, who had also drawn against HomeLess.  This time though, Kanga would get more than a draw. Despite losing the first map 1-7, the newcomers would strike back and take three points by winning 7-5 on the second map.

This would be followed by a comfortable 7-3, 7-3 Fnatic victory over Team SiNister, with the Australian leaders repeating the exact same scoreline the next day against HomeLess as well. Kanga, though, failed to continue a points-winning streak, falling to Onyxian 2.0 by 3-7 and 1-7 scorelines.

This week, keep your eyes peeled for TBD (the former Mindfreak roster) to go up against HomeLess on Wednesday, while FURY and Wildcard both play twice in the week -- first against each other, and then against Fnatic and Team SiNister, respectively. 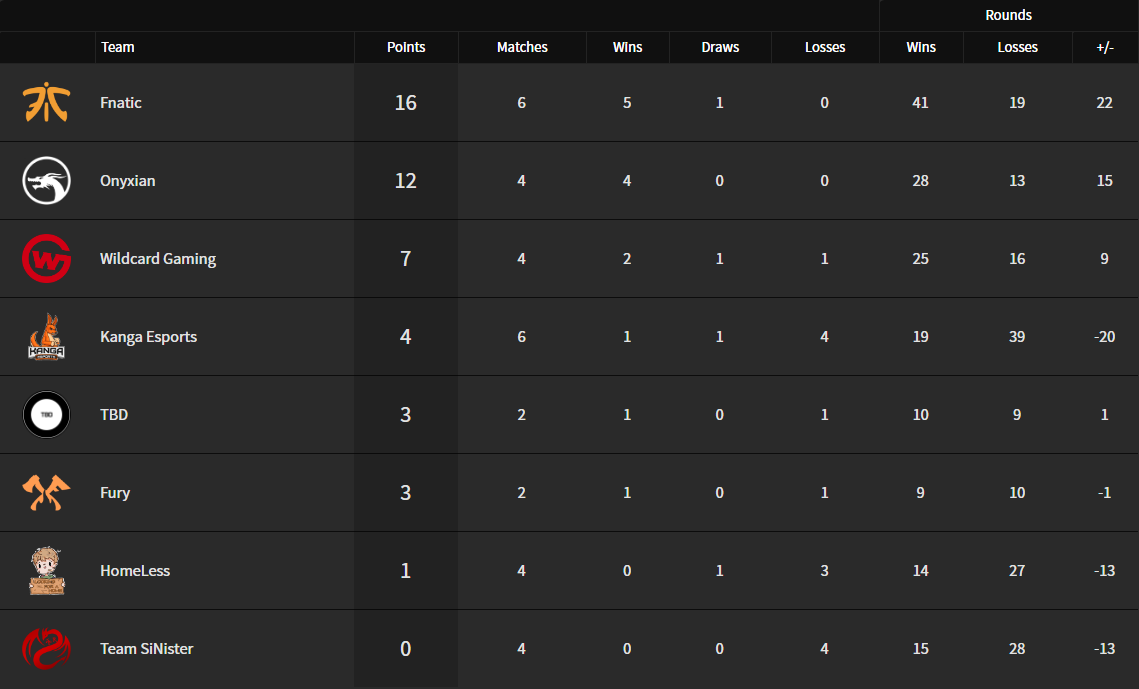 Southeast Asia was not one to shy away from a surprise either, with Lese Esports managing to take two points off a high-flying Xavier Esports by forcing a draw. However, Xavier responded as well as the Thai team could have, demolishing Lese 7-0 on the second map to send a well-received message. Then, a Qconfirm expected to struggle against an unpredictable Team 1122 swept through the Hong Kong opposition, winning 7-2 and 7-1.

Scrypt E-Sports kept up the pattern of one-sided games, crushing 200 Degrees by an identical scoreline as Qconfirm had secured against Team 1122, while Giants Gaming debuted with a 7-3, 7-3 victory over fellow Singaporean side Valor eSports.

This week, Scrypt takes on the difficult but not impossible challenge of Giants Gaming, while the two former Challenger League squads of Team 1122 and 200 Degrees take each other on. Lese, too, will be looking for blood against Qconfirm, though it is unclear if the Malaysians will be successful, while Xavier will look to take another six points against Valor. 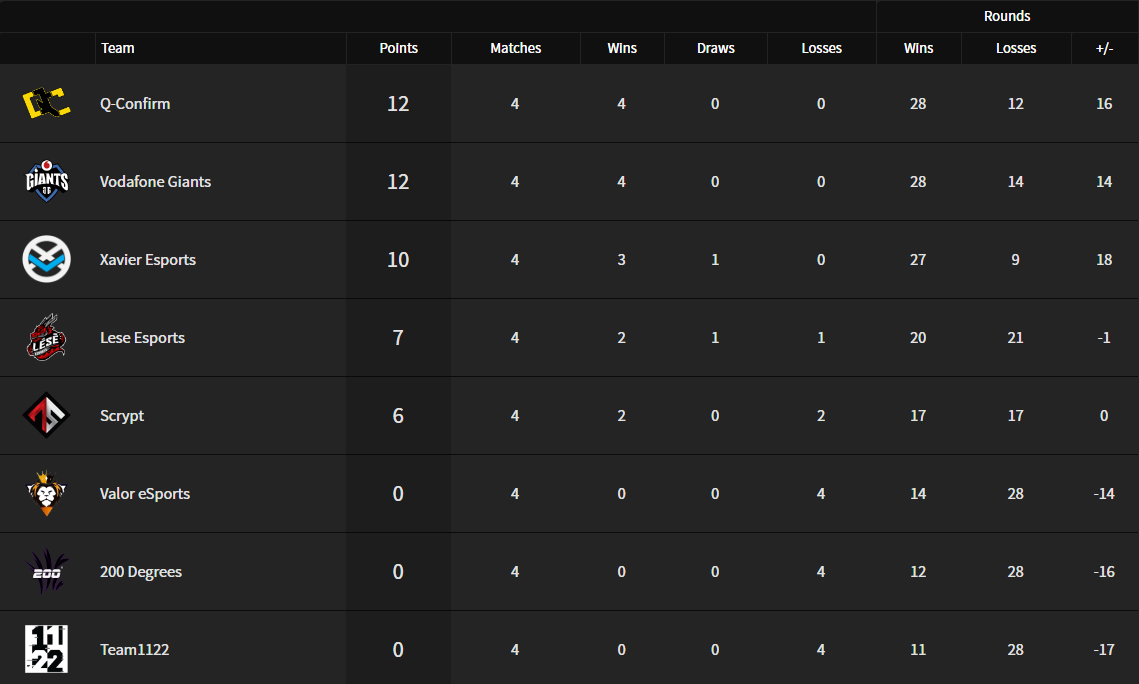 Over in Japan, NORA-Rengo took down Yoshimoto Gaming Lamy 7-2, 7-4 in a match vital to the team’s hopes of making it to the Pro League Finals, while rival team FAV Gaming marched on with a 7-3, 7-1 takedown of Takumi Festival LBX. GUTS Gaming, though, certainly sprang a surprise, taking down the hotshots on DetonatioN Gaming (DNG) 7-4, 7-4, to reaffirm the former’s dominance in the Pro League after many had expected the latter to shoot to the top this season after a scintillating run in the Six Invitational 2020 online qualifiers.

Finally, Cyclops Athlete Gaming (CAG) was also run closer by Unsold Stuff Gaming (USG) than expected, going to the 12th round on both maps but coming away with six points regardless, winning 7-5 on the first and second map.

This week, watch out for potential fireworks on Wednesday, with USG going up against GUTS, and FAV scheduled to play DNG after. Thursday seems to be a duller affair for now, but with NORA-Rengo and CAG both playing Takumi Festival and Yoshimoto Gaming, respectively, there are still great games to follow. 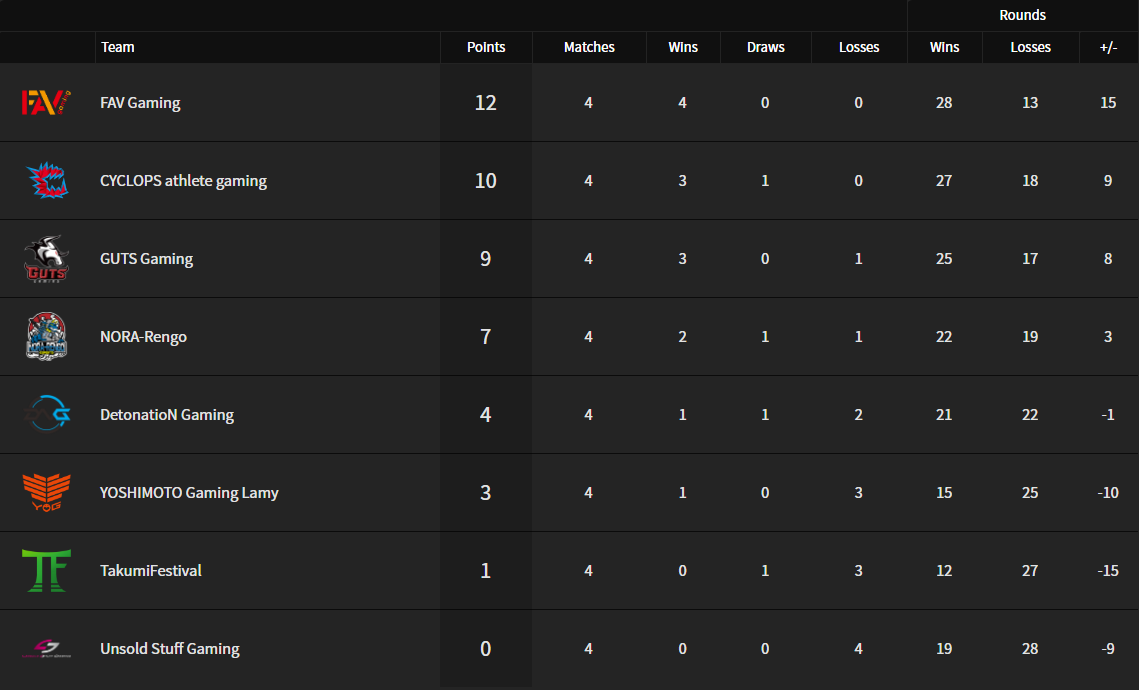 Finally, South Korean fans finally got to see Cloud9 in action, but they were likely thoroughly disappointed. Scheduled to play on both days back-to-back, Cloud9 not only drew and lost 3-7 against SCARZ, the team could also not secure six points against Axiomatic, only winning the first map 7-3 and then drawing the second.

This week sees TRIPPY in action twice, first against Cloud9 in a match that the second-seed from Season 10 could well secure six points from, while Cloud9’s players themselves would hope that the subsequent match between SCARZ and TRIPPY has enough points dropped to help their own campaign.