Siege Around the World this Week - July 1-7th

As the Pro League continues for Season 10, let’s take a look at the biggest and best games from the lower leagues around the world this week, the 1st to 7th of June.

This series aims to highlight the best and most interesting games of all the lower leagues in competitive Siege, from the BR6 national league to the German Saturday League, to ensure that you don’t miss the best action going on at all levels of play.

Infinity, Atheris, Anahuac and Timbers are the final four teams looking to take home the Mexican Nationals title, and this weekend we will see who will be the lucky winners that will face each other on August 3rd at the World Trade Center in Mexico City. 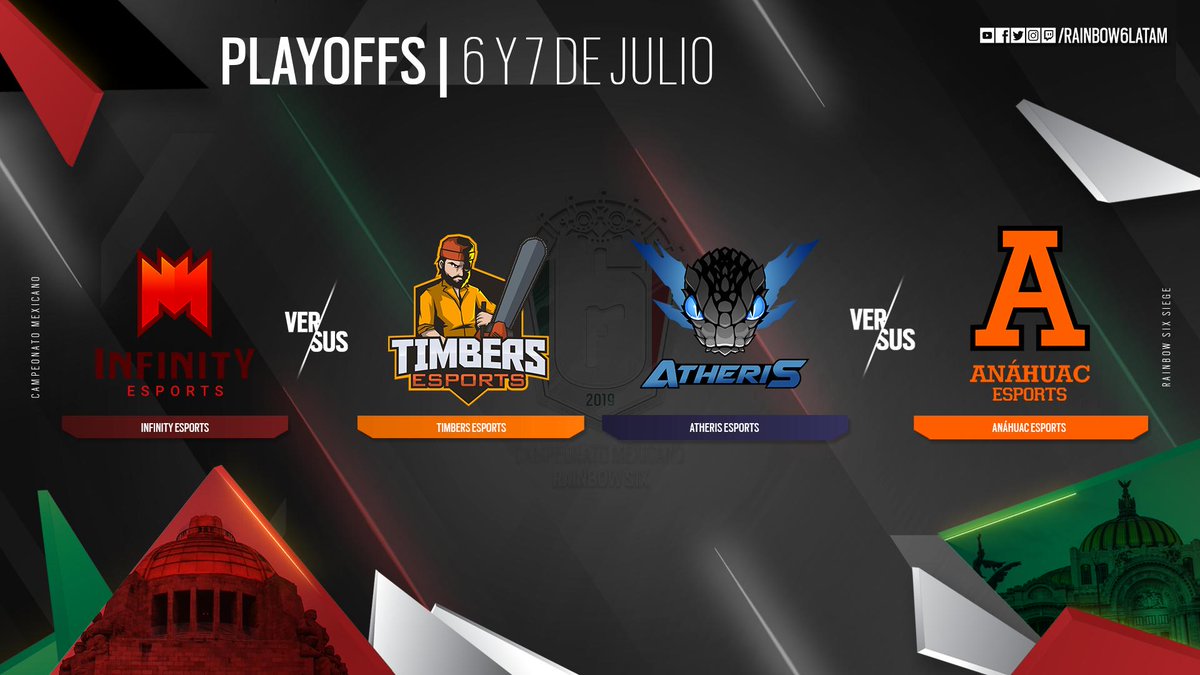 In our first semi-finals matchup we have Infinity Esports, the only unbeaten team in the league, facing off against Timber Esports, who were barely able to make it into the playoffs. During the regular season, these teams faced off quite evenly -- in their first meeting Pex (now Infinity) and Fenix (now Timbers) tied the in just the league’s second play day. While their second game had two really close maps (7-4 and 7-5), Infinity showed their dominance and took home the 3 points.

This time. though, it’s do or die for both teams. Will Infinity’s unbeaten streak continue in the Grand Finals or will Timbers continue their Cinderella run all the way to the World Trade Center?

The other semi-final pits Atheris Esports against Anahuac Esports, two of the most consistent teams in the league, having spent most of the time battling for second and third place. Atheris, one of the longest standing organisations in the Mexican Championship (alongside Athlon Gaming), and Anahuac (previously known as Lyon) have both taken points from another, with Anahuac beating Atheris in their first meeting, and the snakes returning the favour in their second encounter. After fighting all year long for the second place in the league, it’s time to decide who is the best once and for all.

Is Atheris taking both the second place and the Grand Finals spot or will Anahuac get payback on the snakes and earn a trip to Mexico City?

“Ready for the Grand Final! Operators tickets are now available at this link”

This Sunday is the final playday of the regular season as the bottom part of the standings are decided. The top six teams have been locked into their position, leaving just paiN Gaming and ReD Devils e-Sports to fight for seventh place, with the eighth-place team being automatically demoted to the Series B league for the 2020 season. That means this week, paiN Gaming needs just a single point from their game against Immortals to survive, while RDS will need to defeat INTZ and hope that paiN falls flat in their game to fight another day.

What makes the RDS game more interesting than that of paiN’s is that earlier this week ReD DevilS’ said goodbye to two of their players in VelveT and Abreu, with VelveT’s replacement debuting in this crucial game, while Abreu will continue on until Wednesday’s Pro League matchup against Team Liquid. This means that regardless of its effect on the BR6 League, this game would be interesting for its relation to the wider LATAM scene as we get to see what the new player can offer and judge whether it’ll be enough to lift themselves out of the dire position they currently sit within the Pro League.

Also happening this week in the BR6 League are the playoffs of the Series B, with the league’s semi-final game between Guidance Gaming and WP Gaming set to be played this Saturday. While Team oNe has clinched the automatic promotion spot to the main league after winning the Series B, the winner of this game will face off against Keys Stars, with the winner of that facing the seventh-placed Series A team for a chance at promotion. While it may seem somewhat of a far off game, this is the culmination of a 10-month long league with the teams being in with a chance at competing in the all-LAN, $90k+ main league, making this a huge deal for those involved.

This week’s French league games were moved back from the usual Wednesday timeslot to Tuesday, presumably in order to accommodate the schedules of both PENTA and Looking for Org (ex-LeStream Esport) who will be attending DreamHack Valencia this weekend.

The games had three clear favourites, as the current and ex-Pro League teams were all split up this week, with the fourth game including the two promising up and coming rosters of MCES and GameWard where MCES managed to take down their opponent in a fairly quick fashion, despite them having had just one point prior to today.

Catch our full rundown of this playday later this week following the DreamHack Valencia event!

Also happening over the weekend is some Indian Rainbow Six action, featuring an INR 150, 000 (US$2180) prize pool -- the biggest yet in the subcontinent. Titled Kryptonite R6S, the online qualifiers have been played over the past two weeks, with the LAN Finals scheduled for the 6th and 7th of July.

Four teams have qualified for the Finals -- Mammoth Gaming, Fallen Knights, Akasuki, and Team Neoners. With the Indian region lacking any form of formal competitive structure from ESL and Ubisoft, this event is likely to catch their attention, and perhaps bring to light some of the better players from the region.

With the event held at the Kryptonite Microsystems & E-Sportz Club in Ahemdabad, Gujarat, the games will be streamed on the host’s YouTube channel, where VODs of previous games are also available.

These are the biggest and most interesting matchups this coming week across the secondary-level tournaments around the world. Keep an eye out for more SiegeGG coverage of all levels of Rainbow Six, including the DreamHack Valencia LAN this weekend and the BR6 Finals later this month.